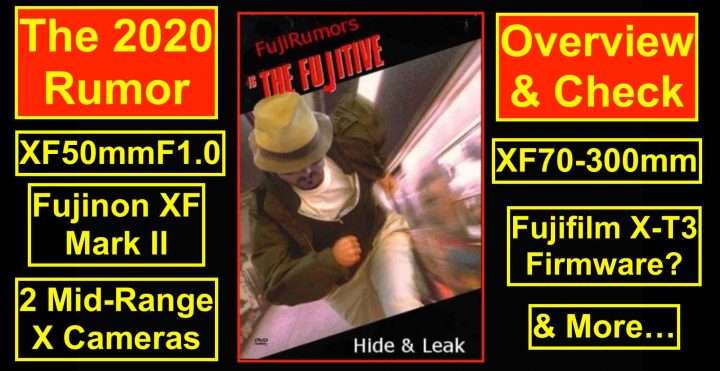 Half a year of rumors is over, and it was probably the most successful we ever had on FujiRumors.

With a total amount of 44 rumors shared, we are currently sharing more rumors than ever in the years before.

The Fujifilm X-T4 was without a doubt the big one in 2020, and I frankly can’t remember if FR ever leaked so much about one single camera, as we did with the Fujifilm X-T4.

At this point BIG thanks to all our sources, for helping me to keep the Fuji X community on fire. Being a Fuji X/GFX shooter is just more fun, if every now and then we get something hot to talk about… ;).

Sharing rumors is one thing, sharing accurate rumors is another. And since we don’t want you to believe in fake rumors like the death of Fujifilm X-H2 or fake X-T3 firmware leak 4.00, we try to honor the time you decide to spend reading FujiRumors by delivering dry and verified rumors.

Where is the Fujifilm X-T3 Firmware Update?

Let me quickly address the big one, before we move to the list: the Fujifilm X-T3 firmware update.

Now, I said that there would be an X-T3 Kaizen firmware in spring/summer, probably in June, but evidently this did not happen.

The information about the X-T3 firmware came from sources, who also accurately predicted the GFX100, X-A7 and X-T4 firmware update. So how can they be right with GFX100, X-T4 and X-A7 firmware, but not with X-T3?

Well, as I told you many times, if there is one thing, Fujifilm can change anytime, then it’s the release of new firmware updates. And evidently some plans changed at Fujifilm regarding the X-T3 firmware.

What does it mean for the X-T3?

Well, I am investigating it right now. Was the firmware just pushed back to agevolate X-T4 sales? Or completely canceled due to the lack of resources? Or will it get different (less?) features than Fujifilm originally planed? At this point in time I do not know.

Firmware rumors are those, I get wrong the easiest. And in 99% of the cases they are right at the time of sharing, just Fujifilm changes plans.

This is why I was thinking if I should stop sharing firmware rumors. I am debating, because on the other hand this is a rumor site, and if I have strong elements in my hands, I feel confident to share anyway, despite the risk.

But looking at the recent massive disappointment, because the X-T3 didn’t get the rumored firmware, I felt sad that I put hope into the hearts of X-T3 owners, and I feel responsible for their disappointment.

So I thought: let me ask you directly in a survey, if you want me to continue to share firmware rumors or not.

Due to COVID-19 and home-teaching, I had the most stressful spring ever (and I know it was very hard for you guys too). We all have to go through tough times.

One week ago I finished also with all the paperwork for school, and I need just a moment to be out on my mountains and recharge batteries.

But of course I will work again in full power on the rumors now.

And trust me… just wait… the next rumor-storm will come. So make sure to follow FujiRumors, if you want to have a good time ;).