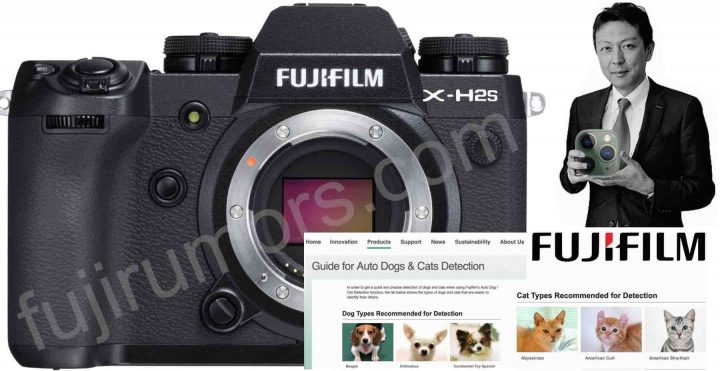 Do you remember the legendary Fujifilm FinePix F80EXR?

Well, the Fujifilm FinePix F80EXR is legendary because it actually was the first digital camera to offer some sort of animal autofocus (limited to cats and dogs and called “pet detection”).

Yep, Fujifilm was once leading the computational photography innovation with animal autofocus.

However, things have drastically changed.

Not only has a feature, that Fujifilm already developed, completely disappeared from their newest digital cameras, but many other brands are offering animal and object autofocus tracking, with Fujifilm definitely lagging behind in this area.

But that’s going to change.

According to trusted information we have received, the Fujifilm X-H2S will offer animal and object autofocus tracking.

but I would not be overly enthusiastic for now. Sure, the Fujifilm X-H2S with its stacked sensor can truly unlock some computational photography magic, but before rejoicing too much I want to see how these features actually work.

I mean, Fujifilm also offers “real time tracking” a la Sony, but in my experience, especially during the wedding I shot last year, it does not work nearly as good as the Sony version (so far that I rather quickly switched back to zone focus tracking for better results). I guess that’s probably also why Fujifilm does not advertise this feature on their cameras (even though it’s there).

And yet, it’s coming, and I am looking forward to see it at work on May 31.

Fujifilm set itself a 3 year plan for huge implementation of computational photography on their cameras. And the release of the Fujifilm X-H2S marks exactly that 3-year deadline that Fujifilm has given itself.