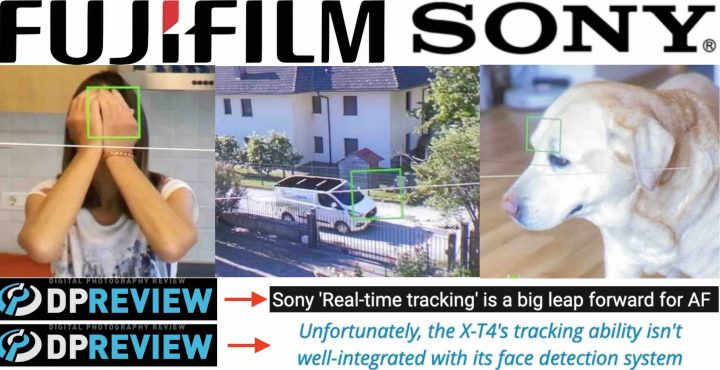 There is something I do not get (help me out, if I miss something).

When Sony released their “real time tracking”, it rightfully got tons of coverage and praise.

Imagine you are face/eye tracking a person with your camera, but then the person either puts her hands in front of its face or just turns around. Well, the camera will keep up tracking whatever “replaced” the person’s face (the hands or the back of the head etc.).

That’s cool, because it means that when the camera loses the face, it will keep up tracking the subject.

A massive coverage and well-deserved hype for Sony.

I will demonstrate it with a video I just did, tracking my mother, my dog and a car.

To set it up in your camera, do this:

Even in the latest DPReview review of the Fujifilm X-T4 I think I did not read a single line about this feature. And yet, on the Sony, they called this feature a “big leap forward for AF” (video below).

Ignore faces with face detection enabled? I tell you how.

If you put your focus box on an object and half-press the shutter button, and then a face comes into a frame, the X-T4 sticks with the object you chose, but a grey box appears on the new face, just to let you know “Hey, I saw a face, if you want, I can track it“. But it won’t let your chosen object go. Unless you want to.

To switch to the detected face, let the shutter button go press the focus stick, and the camera switches to the face. You don’t want the face again? Press focus stick again, place your focus box on the object you want, and track it, ignoring faces (but always with the grey square around faces, just so the camera let’s you know it is detecting faces).

Down below a short video I just did at midnight here with my wife to demonstrate it.

I select the couch, and even though my wife’s face is in the frame, the X-T4 sticks with the couch, because I told the camera I want so. But there is a grey box around my wife’s face. I toggled to the face doing what I told you above. And then quickly back to the couch.

I am not saying the Fuji AF is as good as Sony. But I say it is at least something they should have mentioned, tested and eventually also compared to Sony.

But don’t worry, I have a plan

I am going to tape a Sony logo over my Fujifilm X-T4 and send it for testing to all possible vloggers and bloggers, so they might notice this amazing feature also on the X-T4 and maybe, who knows, even praise the full frame image quality ;). Just kidding, in these days where all is so heavy and full of bad news, we need a bit of lightness.

Now seriously, as I applauded Sony, when they released that feature in their AF system, I think I should do the same also with Fujifilm now.

And especially, I’d like to let you guys know about it. Sure, Fujifilm came a bit late compared to Sony, but now with the X-T4 we are here, with a real-time tracking that could simplify our tracking experience quite a bit :).

Remains to see, how well it works compared to Sony’s version.