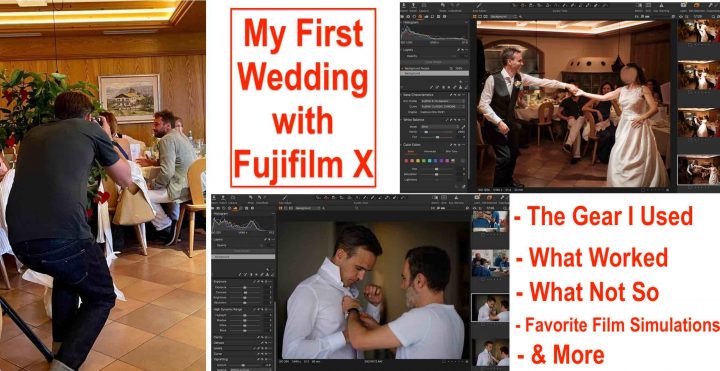 [NOTE: at the event every participant was either vaccinated or had been tested negative in the 48 hours before (the tests are free and fast to make where I live). Most of the guests (me included) were fully vaccinated]

Did you notice it?

For the first time in years, last Saturday I haven’t published something on FujiRumors for an entire day.

And the reason is simple: I was at the wedding of a very close friend (I also served as his best man).

I also was in charge of taking pictures. Not all of them. They had a professional photographer shooting with a Canon DSLR. But the photographer left at dinner, so that’s mostly when I took over.

Now, my buddy told me he does not want to see me stressed running around taking pictures all the time, and that I should enjoy the party. And I promised him he will see me holding more often a glass of good wine rather than a camera. And that’s what I did.

But, despite a bit of pressure to get the job done right, I also enjoyed to take images a lot. In fact I felt honored that I could contribute a little bit to capturing such precious memories for his life.

Let’s talk about what went great and what not so with my Fuji X gear during the wedding.

Any wedding photographer out there reading FujiRumors?

Well, if so, then oh boy, you have all my deepest respect for your job!

I mean, I am a teacher and blogger. And in both cases, if I mess up a lesson or an article, I can fix it later on with another and better lesson or article.

But now that I photographed a wedding for the first time, even though the part in the church and the reception at the restaurant was covered by the official photographer, I did feel quite some pressure knowing that this is a 1 time only moment. I don’t get a second chance to get it right. And having a job where you expose yourself to such a pressure, well, I guess you must have nerves of steel for that.

So if wedding photography is your job, you have my deepest respect. I probably would not have the nerves and strength to do what you do, and I am grateful that there are guys like you out there taking over this job.

The official wedding photographer used a Canon DSLR. Interestingly the glass he used was all from Sigma.

And quite frankly, the setup I used was perfect for what I did. Maybe sometimes the XF 18mmF1.4 or the XF16mmF1.4 would have been handy, but shame on me, I don’t own those lenses.

As I said previously, I knew I don’t have to interfere with the official photographer, so whenever he was taking images of the guests, I did enjoy talking with friends and drinking good wine. But in those occasions, where he was away with the bridal couple taking some portraits, I sometimes grabbed the camera and took some snapshots.

So how did it go? Let’s talk about it!

My Fujifilm X gear performed fantastic, except for one thing, where it performed OK but not great. You’ll read about it below.

The probably biggest advantage I had over the official photographer, was that most of the guest were basically also my friends or people I know quite well. And as some of you already predicted in my original article, this allowed me to get close to them with my camera gear without intimidating them.

Look for example at the image below, where a good friend of my childhood, that I haven’t seen in years as he moved to another part of Italy and opened a restaurant there, spotted me taking pictures. He gave me such a genuine smile as he was happy to see me again. I took this image while he was approaching me with his wife.

And there are a couple of images like this, where the guests just wholeheartedly smile into the camera or just keep doing their stuff spontanously while I take some images.

Last but not least, the official photographer probably did not even notice that I am also taking images. I acted stealthy like a ninja as I did not want to interfere with his work and irritate him by standing in his way (you can see an image of me down below).

As for the gear itself…

I came back home with lots of lovely images. Especially the newer processor and faster sensor in the Fujifilm X-T4 performed admirably even in low light, but also the Fujifilm X-E3 was a solid performer throughout the whole event.

Just one thing I wish Fujifilm would improve, and you can read it down below.

What Went Not so Great

Let me say if first clearly. I loved covering the event with my Fujifilm X gear.

In 99% of the cases if I missed the shot, it was my fault. Although, Fuji, that AF box, please, it’s sometimes not so easy to see in white color. Give me the option to highlight it in red. So I’d immediately see where my focus point is. I think only the Nikon Z system offers it in red so far. Copy that from them.

Anyway, all was perfectly fine, until I decided to try out a feature few people know it exist on Fujifilm cameras: the Real Time AF tracking a la Sony.

So I did set up my camera to access that feature (to know how, read this article).

In theory, this would be a fantastic mode. The camera automatically switches between face/eye detection and AF tracking. You can also easily and quickly tell the camera to ignore faces and stick with tracking or vice versa. It’s a great mode that I’ve described in detail here.

Now, I’ll be honest, for my type of photography I never use it. But in an event like this, it would have been quite handy. That’s why I decided to give it a shot.

However, after my first attempts (in quite low light), I saw that the hit rate was not consistent enough and I decided to use zone focus tracking for much better results.

So that’s my recommendation: for tracking stick with zone AF. It’s the most solid performer.

But I hope Fujifilm will keep up improving on the real time AF tracking, as it is not really usable if only 40-50% of the images are in focus. It needs to get at least to a 80-90% hit rate.

And while I am confident that the Fujifilm X-H2, with new processor and sensor, will probably arrive to those 90% hit rate (guess, not rumor), I do feel that this is mostly just a coding thing, and hence I hope for the X-T4/X-T3 and other 26MP X-Processor 4 cameras to get a significant improvement in terms of real time AF tracking via firmware, too.

But to be clear, real time AF tracking is not the only option Fujifilm cameras offer for tracking. There are currently better options like Zone AF. They’ll serve you well while waiting for Fujifilm to get real time tracking on Sony level.

Starting from now, I’ll be busy with the editing.

I have made a brutal selection and narrowed it down to 129 images to edit and deliver to the couple.

As you all know, I’ve 100% switched to Capture One a few years ago. Currently I am using the latest version 14.3, with the magic brush (which I love) and more. Read more details here.

All my editing starts with setting the right vibe and mood by adjusting the colors. Something that took quite some time in the past, but now this part of the editing is shortened to a minimum thanks to the awesome Fujifilm film simulations.

I just slide over the film simulation options in Capture One, and quite immeditaly I can see which one works best.

My favorite since a while now is Astia, in my opinion the best balance between vivid and yet balanced colors and great skin tones.

And indeed, for outdoor shots I used Astia in most cases, and sometimes Classic Chrome.

I am currently starting to edit the indoor shots, and I’ve found that with all the artificial light, a film simulation that since now I’ve hardly used works really well: ProNeg Standard.

And sometimes, when there was just too much artificial light distracing from the main subject (for example the couple dancing), I also went with Classic Chrome again or Acros. You can see an example below, with the face of the wife blanked out, as I still have to ask her permission to share images where she is recognizable.

I will now keep up my editing and hopefully be able to deliver everything by Thursday, when I have a lunch with the just married couple.

I felt the pressure, but it was also a lot of fun.

And I am happy with the images I was able to get thanks to my Fujifilm X gear. I think some of them will become precious memories for the couple, which fills my heart with joy.

Somebody on Instagram also asked me if I’d do it again.

…Yes, but only if it was for a very good friend and there is an official photographer, as the job wedding photographers do is complicated and I simply don’t have the nerves to carry such a responsibilty.

Now I go back to my editing… but don’t worry, I didn’t forget about you.

Be a bit patient, as rumors are coming.

P.S.: one last image of me below taking images ;)