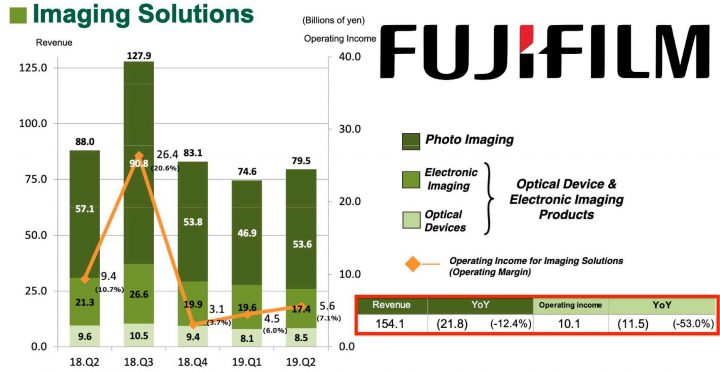 Canon, Nikon, Olympus, Sony and others have already reported their financial results.

Most of them are devastating bad. Sony is doing best, even though even Sony has to record a -3,4% sale decrease.

Well, Fujifilm now published their financial results for the this quarter (ends September 30, 2019) and the numbers are not good either*.

Fujifilm’s cashcow Instax keeps slowing down, and digital camera sales suffer strong. All this results in a revenue decrease for the imaging division of 12.4%.

But Fujifilm remains optimistic and says:

we will further enhance the sales by providing products with competitive advantages utilizing our unique technologies, and by running effective promotions to achieve a performance target.

The only camera Fujifilm mentions clearly positively, is the Fujifilm GFX100, which enjoyed “strong sales“. And that must be right, since 6 months after announcement, the camera is still hard to find on the market.

Dear Fujifilm, do you know that plan not to release any Fujifilm X-H2 not even in 2020? Forget that! Give us the Fujifilm X-H2 now with Samsung/Fujifilm ISOCELL+ sensor technology, and you’ll see the numbers go positive again. And a Fujifilm X-T4 with IBIS could help, too! Hurry up!

In the Imaging Solutions segment, consolidated revenue amounted to ¥154.1 billion (down 12.4% from the same period of the previous fiscal year).

Consolidated operating income amounted to ¥10.1 billion (down 53.0% from the same period of the previous fiscal year).

In the photo imaging business, revenue decreased due to such factors as declined sales of photographic paper, and instant photo systems caused by inventory adjustments at some U.S. retailers and a drop-off period before new products’ launches in Q1. We are aiming to expand sales mainly with the instax mini LiPlay, launched in June 2019 and instax mini Link, a printer for smartphones with unique functions, excellent operability and portability, launched in October 2019.

In the electronic imaging business, revenue decreased from the previous fiscal year due to a decline in the sales of entry-level mirrorless digital cameras under severe market conditions.

We will strengthen the sales of FUJIFILM GFX100, a mirrorless digital camera equipped with a large format sensor with the world’s highest 102 million pixels resolution, FUJIFILM X-A7 launched in October 2019, and FUJIFILM X-Pro3 to be launched in November, which is the flagship model for the X series of compact and lightweight mirrorless digital cameras that deliver outstanding image quality with Fujifilm’s proprietary color reproduction technology.

In the optical device business, revenue decreased, reflecting a declined demand for various industrial use lenses such as on-vehicle lenses due to the economic slowdown in China. Fujifilm is enhancing a line-up of new products for business growth, such as FUJIFILM PROJECTOR Z5000, which combined optical technologies of FUJINON Lenses, and the Premista series of zoom lenses for cinema cameras compatible with large format sensors.

[…] although sales were strong for middle and high-end models such as FUJIFILM GFX100, a mirrorless digital camera equipped with a large format sensor with the world’s highest 102 million pixels resolution, launched in June 2019.

In Septermber 2019, FUJINON Lens GF50mmF3.5 R LM WR, a compact prime lens weighing just 335g, was added to the lineup as an interchangeable lens for the GFX series. The lineup of 10 lenses in total covers a broad range of shooting conditions, offering users a joy of shooting with the GFX series.

In the Imaging Solutions segment, though revenue decreased compared to the previous fiscal year and operating income also decreased compared to the previous fiscal year due to such factors as a decline in revenue and effect of exchange rate, we will further enhance the sales by providing products with competitive advantages utilizing our unique technologies, and by running effective promotions to achieve a performance target.