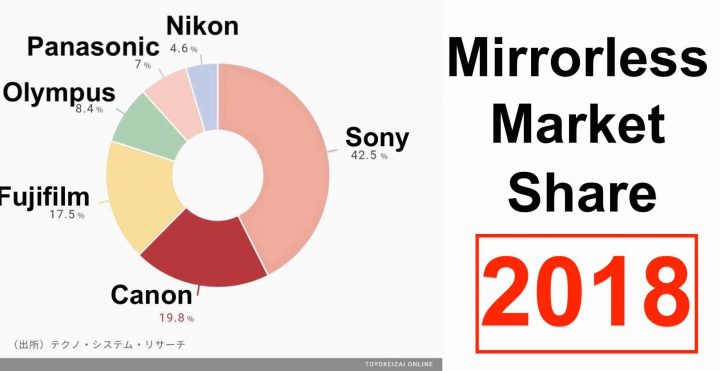 Regarding the data, it is unclear if it refers to Japanese domestic market share or global market share, as toyokeizai just writes:

The mirrorless market share in 2018 boasts an overwhelming 42.5% [for Sony] (according to Techno System Research).

However, earlier in the article toyokeizai writes:

In 2018, global shipments of single-lens reflex cameras declined by about 16% year-on-year to 6.22 million units, while mirrorless sales increased by about 3% to 4.28 million units (Techno System research study).

This seems to indicate that Techno System Research is looking at the global market share.

Now, I started blogging on FujiRumors (and owning Fuji gear) when Fuji’s global market share was about 0.1%.

If, at that time, one of my 7 daily readers would have told me that 9 years later Fujifilm would grab 17% of the global mirrorless market share, I’d have declared that person for crazy.

So, seen from this perspective, Fujifilm experienced a fantastic growth.

However, in a market changing so quickly, you can’t live off the past achievements.

Fujifilm has to work hard to turn around the current situation, which sees a 12.4% revenue decrease compared to the same quarter of the previous fiscal year.

And what Fujifilm has to do, is not to hesitate and give us immediately a Fujifilm X-H2 maybe with Samsung/Fujifilm ISOCELL+ sensor and also a Fujifilm X-T4 would not hurt.