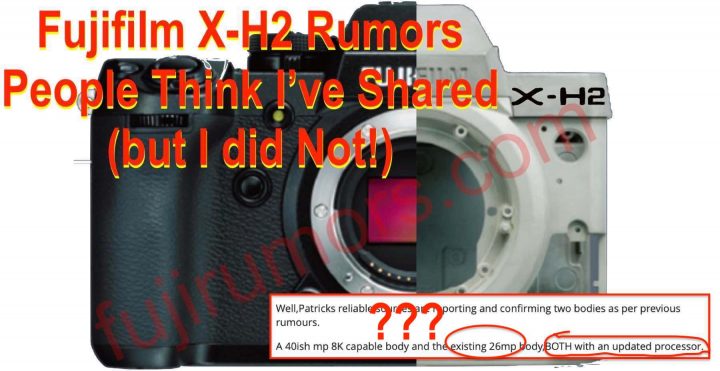 I start reading in forums stuff that apparently I’ve claimed about the Fujifilm X-H2 cameras, but in truth I never did.

The reason this happens are mainly two:

Maybe all the “rumors” attributed to me (but that I’ve never shared) will turn out to be true indeed. And I wouldn’t be surprised if many did. But in any case I felt the need to clarify this, otherwise, if some of the stuff shared below does not turn out to be correct, people will start attacking me for sharing fake rumors and clickbait.

So, until any of the above is confirmed (or debunked) by my sources, they remain mere speculations. Some of them very reasonable speculations, but still, just speculations.

Look guys, here on FujiRumors the Fujifilm X-H2 marathon just started. So definitely give FR a look every now and then to see if something new goes online. And it will… oh boy it will ;).

*We told you there won’t be any more X series camera in 2021 after the X-E4 (hence also no X-H2 will come in 2021). Now you tell me that we got the X-T30II o September 2021, but that camera was a last second decision by Fujifilm and it’s an X-T30II with new firmware and better LCD and and RAM.