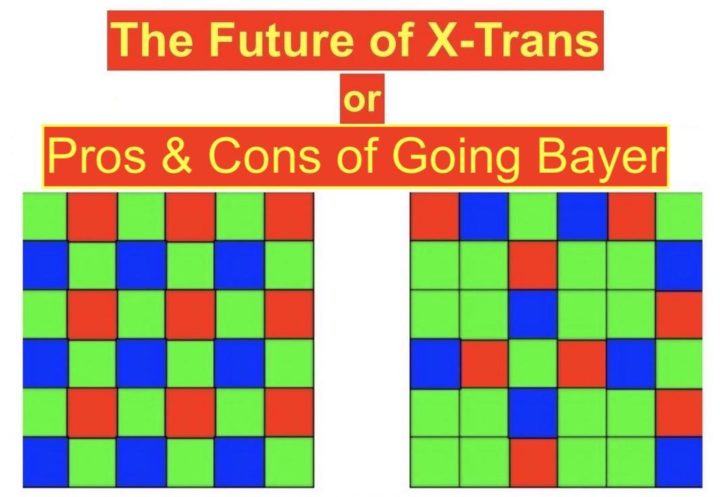 First and foremost, let me say that I LOVE X-TRANS.

But the fact that I love X-Trans, does not prevent me from discussing the big Bayer Vs. X-Trans debate, that has recently been fueled again by DPReviewTV in the X-T100 review and Tony Northrup in his X-H1 review, in the most objective way as possible.

So today’s question is: is there any reason why Fujifilm should go Bayer also on higher end APS-C Fujifilm X-series cameras?

Some people do probably not have the 5 minutes of time it needs to read this article. They will read the headline, and arguing in favor or against X-Trans/Bayer by default :) .

So for those people, who refuse to read the article and don’t go beyond the headline, I will at least make a bullet-point list, in the hope they will read that one at least.

This is a super short condensation and simplification of more complicated subjects, and as such it is naturally an inaccurate list. Each point will elaborated and clarified in all its shades below.

If you want, you can now start your 5 minutes reading time :)

I’ll address this first, because it is the easiest one :)

Tony Northrup says he has problems working with X-Trans files in Lightroom.

This is true, if you work with X-Trans like you work with Bayer. But as we demonstrated in our debunking X-Trans myths as well as in our “sharpening X-Trans files” article, there are ways to get perfectly sharp images with Adobe products only… it just requires a few extra editing steps and the use of photoshop.

If you want to use Lightroom, but also want the default better demosaicing of Iridient, just use X-Transformer as a Lightroom plug-in. You get best of both worlds :) .

And if you have no problems using other converters, just get Capture One, Iridient & others, who do a better job pulling out the best of the X-Trans sensor with no need of extra editing steps.

As Fujifilm says here, X-Trans was mainly created to mitigate (not eliminate) the following issues present with Bayer sensors cameras:

at minute 11:39, DPReview says that the 16 MP X-T1 effective resolution is not much lower than 24MP, due to the virtues of the X-Trans sensor, as well as less color noise and moiré

DPReview, who can’t be really labeled as a Fuji fanboy site (actually quite the opposite is true), says that their lab tests show the 16MP X-Trans Fujifilm X-T1 (without low-pass filter) has an effective resolution that “is not much lower than 24MP” (compared to Bayer cameras with low pass filter) – we reported here.

People who buy the X-A or X-T100 line (mainly Asian women) do not really edit their images, whereas people who buy X-Trans cameras are more used to edit images in post.

This is why the processing engine on Fuji’s Bayer cameras is more aggressive and sharpens the image more than the processor of X-Trans cameras does.

I personally prefer the X-Trans sensor/processor rendering of the image, since the Bayer/processor combo looks too plasticky. But that’s probably a “wrinkle-less” look Asian women prefer.

Regarding the RAW files, we should take all lab tests with a grain of salt, since they all use Adobe standard demosaicing to judge the RAW quality of X-Trans sensor cameras, and we already reported above, that this is not the optimal solution.

Also, keep in mind that lab tests at imaging-resource for example, are made using different lenses on different cameras. So, for example, the X-T100 was tested with XF56mmF1.2 lens and the X-T20 with XF60mmF2.4 lens. For more fair results, it would be better to use the same lens.

The Fujifilm X-T1 hit the market in times when most Bayer cameras still had less megapixel.

However, the higher the pixel density, the less moiré is likely to occur also with Bayer sensors. Hence, when companies started to squeeze more megapixel into their cameras, they could also start to remove the optical low pass filter, or at least put a weaker one into their Bayer cameras (like the weak filter on the Sony A6500 or also the brand new Sony A7III).

Still today, Bayer sensor cameras show more moiré than X-Trans cameras (including the 50MP Fujifilm GFX 50S), but I think that once APS-C cameras will go beyond 30MP and Medium Format reach 100 Megapixel with the Fujifilm GFX 100S, one of the advantages of X-Trans cameras (less moiré) will become almost negligible.

But since that day comes, the X-Trans sensor still has an advantage. And it’s not me, a fanboy, saying it, but DPReivew’s own lab test. Check out below, and enjoy the moire-free Fujifilm X-H1 image compared to the others. 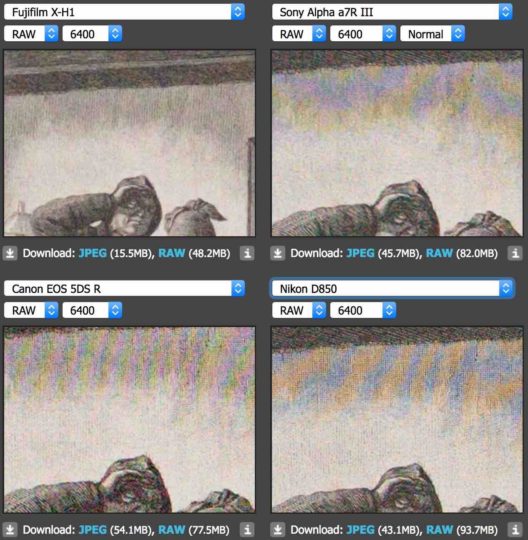 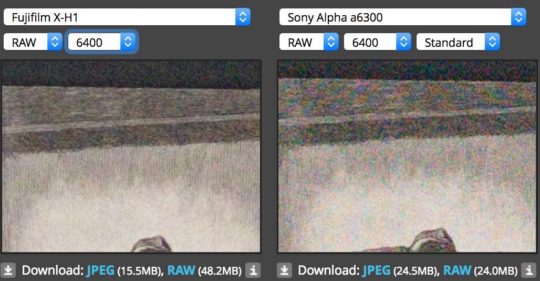 But X-Trans is not only about less moiré. Here are some additional X-Trans benefits:

To verify this, I decided to make a little game. Down below you see a comparison between the Sony A6500, Fujifilm X-A5 and Fujifilm X-H1 at ISO6400 (RAW).

Check out the grain structure and colors noise, which one do you prefer?

Well, then down below is the solution:

In my eyes, the best performing camera is the Fujifilm X-H1, which shows less color noise and more pleasing grain. Consider that all the RAW files were processed using Adobe standard RAW demosaicing (no X-Trans specific fine tuning for sharper results).

Now that we talked about the advantages of X-Trans sensors, let’s talk about those of Bayer sensors.

First of all read this statement by Top Fujifilm Manager (and official FujiRumors lover ;)) Toshihisa Iida:

And now read these 3 statements of other Fujifilm managers:

So the managers tell us that processor limitations are often the reason why certain features can not be added to a certain camera and overall speed performance is limited, and that X-Trans is 20-30% more power-hungry than Bayer.

Of course the 20-30% more computing power required by the X-Trans sensor has consequences on things like heat generation, which Fujifilm partially solved by using larger heat sinks on the Fujifilm X-H1, so that, as Fuji Guy Billy told us here, “the processor can run much higher“, allowing for example the X-H1 to shoot at 200mbps instead of 100mbps on the X-T2.

But fact is: X-Trans is simply more power-hungry and by switching to Bayer CFA, Fujifilm would immediately “relieve” its processors of 20-30% of their work.

The benefits of the 20-30% saved processing power when using Bayer could be:

For my personal needs

So at the end of the day I do not need many of the improvements listed above, and most improvements can be achieved by keeping the X-Trans sensor and improving sensor readout speed using a stacked sensor and/or a new processor.

So, for me and my personal needs, the only real remaining advantage of going Bayer would be that the cameras would be cheaper (and that’s a HUGE advantage).

But I’d lose the more “film-like” grain and less color noise at high ISO (as well as better moiré control, at least until APS-C goes beyond 30MP).

Fujifilm Manager Toshihisa Iida said it clearly this interview of 2017: the next generation APS-C sensors will still be X-Trans.

So we can be sure that the Fujifilm X-T3 will have a new X-Trans sensor that will come along with a new processor, that will maybe overcome some of the limitations mentioned by Fujifilm managers with the current X-Processor Pro.

Now I ask you, should Fujifilm stick with X-Trans also after the Fujifilm X-T3 or go all-in with Bayer?