TheCameraStoreTV had a fantastic live stream with Fuji Guy Billy today, and of course it’s all about the Fujifilm X-H1. Make sure to check it out here.

I was lucky enough to attend the live stream and make my questions, but Jordan anticipated me on the first big question I wanted to make to Billy: back in 2016 Fujifilm said X mount is not compatible with IBIS. What did Fuji do on the Fujifilm X-H1 to make it compatible? Here is Billy’s answer:

“We understand how IBIS works with pretty much all brands. We thought it was a very strong feature to incorporate.

At that time when we said that statement, the technology for us wasn’t there yet. Because, when we develop our cameras, image quality is number 1 for us. And we know that with IBIS, there is always some sort of loss in that, so we needed to develop a system that still mantains that high strict image quality. That really was successful with the X-H1.

We had to make the IBIS system a little bit larger in order to do so. That’s why the X-H1 itself is slightly bigger to accommodate that.

It’s the only IBIS system that has a dual processor that can make 10,000 calculations and that corrects instantly for any movement.”

How I understand this, is that Fujifilm studied other brands’ IBIS systems, they saw that those solutions won’t work on Fuji cameras, they needed time to develop a technology specific for their cameras, and their solution ended up requiring the whole camera to become bigger compared to other systems.

Heard that, I asked Billy if this means that IBIS won’t come to smaller Fujifilm cameras in future. Billy answered:

“currently the IBIS system is quite large and that’s why this camera itself is large. We really want to maintain image quality. Now it’s very important for us to develop the system. I think as we learn to grow and develop, who knows where that technology will go.”

This makes hope that one day we will see IBIS also on smaller cameras. But currently, it’s not possible. Related to this, I remind you that we rumored the Fujifilm X-T3 has no IBIS.

Now just a few more highlights of a long and very interesting live chat…. oh, and do NOT miss the Wooden Niccolls movie shot entirely on X-H1.

What did Chris hate so much on the X-H1, that he wanted to destroy it? Discover it on the TCSTV X-H1 live stream with Fuji Guy Billy 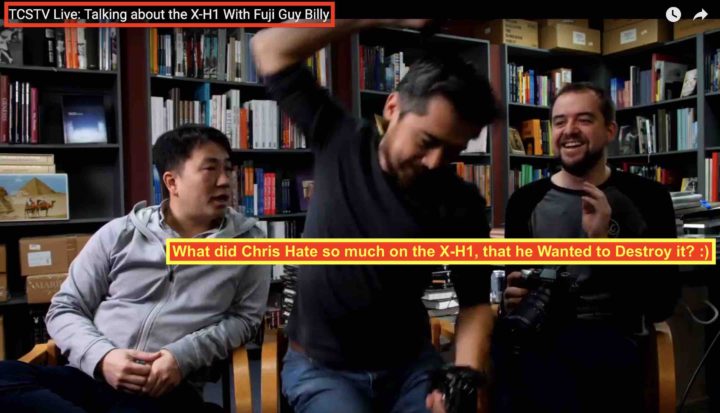