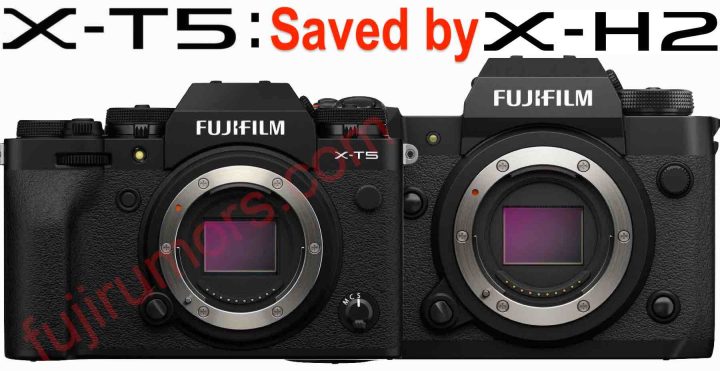 The Fujifilm X-T line was never ment to be a flagship.

And how do I know?

Well, I tell you now…

Do you remember when back in spring 2017 we shared the rumors about Fujifilm working on the “ultimate” Fujifilm APS-C camera? (rumors of March 3, March 14 and April 14 2017)

That “ultimate” APS-C camera did not see the light of the day as it was originally planed. But some aspects of that camera survived and made into what would become the Fujifilm X-H1.

So you see: already at times of the X-T1 and X-T2, Fujifilm knew that an even higher end line was needed… a line that in 2018 finally took the form of the Fujifilm X-H1.

Sadly, though, due to Fujifilm’s strategic error of releasing the Fujifilm X-T3 with new sensor and processor just a few months after the Fujifilm X-H1, the X-H1 flopped.

Shocked by this, Fujifilm paused the project in order to re-think on how to organize the whole lineup more wisely, well aware that a successor to the X-H1 was still needed.

This had significant impact on the X-T line, which grew bigger in size, heavier, received a selfie screen, got super-feature packed, became more expensive and what not.

And all this had to happen while trying to stick with the design constraints dictated by the X-T line: retro design, retro operation, not too deep grip and so forth, which are all aspects X-T shooter love and therefore Fujifilm could not change too much.

In short: Fujifilm had to walk a thin line between keeping the DNA of the X-T series alive while also trying to gain new customers who care less about retro feel, but more about features. And by doing so, compromises had to be done [bigger body for better heat dissipation, selfie screen, etc].

But luckily for us X-T lovers, the X-T line is now going back to its roots making it a more photography centric camera as some of the Fujifilm X-T5 rumors we have shared so far suggest:

And make no mistake: all this is only possible, because the Fujifilm X-H line exists and finally freed the X-T line from the burden of being a flagship.

Look, Fujifilm simply has more design freedom with the X-H line over the X-T line. A design freedom that makes it more suitable to adjust to the requests of the market and to evolve over time.

In fact, the X-H line allowed Fujifilm to start to remove some dials, put a top LCD screen on the camera, give it a large deep grip, even get rid of almost all the dials and embrace the mainstream PSAM dial only design.

So that’s how I see it: the X-H line saved the X-T line and probably even the entire X series.

Because if the X-T line would have continued to carry the hybrid flagship burden, it would have come to a point were the compromises to make would have been too many and the line would have lost a huge chunk of its X-T aficionados (like me). And if X-T lovers walk away from Fujifilm, then the whole X series is in trouble (as a Fujifilm manager admitted).

But for now I love everything I hear about the X-T5 so far… well,almost everything, if we ignore consider this rumor and this rumor. And I can’t wait to have mine under the Christmas tree (hopefully).