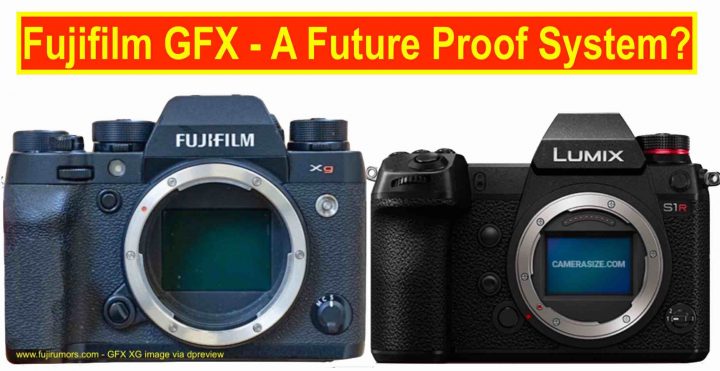 The Future of GFX

And then it became clear to me: Fujifilm medium format has a glorious future ahead. :)

Just two thing before we start:

2 minutes reading time (or just 15 seconds if you jump directly to the conclusions ;) )

When the global shutter sensor comes to be, it will be a big change just to the whole camera industry, taking away all the limitations of current electronic shutters. […]

If the GFX has global shutter, so we can imagine something new. A smaller body.

This was always a weak spot for medium format. But with the Fujifilm GFX system, things have changed.

These start to be prices, that professional/enthusiast photographers are ready to pay. Some FF shooters might be tempted to upgrade. In fact, Fujifilm said here, that 70% of their GFX customers are coming from full frame.

And as prices continue to fall for APS-C and FF, so they will also for MF.

Size and weight is a major issue, and the global shutter will solve it.

Hybrid stills/video cameras are the future, and as such, I believe that IBIS will become an even more important feature in the years to come.

But if you want IBIS and 100 Megapixel on medium format, and you want to do it properly, then, as the Fujifilm GFX100 shows, you have to take care of shutter shock, which is a major issue on medium format cameras.

To control shutter shock, Fujifilm had to build a dedicated lens mount/sensor/IBIS chassis, separted from the chassis that contains the mechanical shutter and the shock absorber.

Design constraints, that make the Fujifilm GFX100 camera big like a Nikon D5.

But the global shutter will change and simplify it all.

The real camera size limit is not technological, but dictated by human nature.

Photographers, who buy high-end gear, usually do not want the smallest camera possible. They might prefer one with great handling and ergonomics, a camera that feels good in the hands, well-balanced with big lenses, with a larger grip, lots of customizable buttons and a big EVF.

Current high-end APS-C and FF cameras, such as the Fujifilm X-H1, Fujifilm X-T3 or Sony A7III, have already reached the size limit, beyond which they would simply become too small for many professional photographers.

So the day the global shutter hits the market, high end APS-C and FF cameras won’t really get any smaller than they are now.

It will be medium format, who will take the biggest advantage in terms of size reduction thanks to the global shutter revolution.

Sure, the sheer G mount size won’t ever make GFX cameras as small as a Fujifilm X-T3, but they will come close in size to high-end full frame cameras.

Just remember the Fujifilm XG medium format concept, which, designed with physical shutter and shock absorber inside, was just a little bit bigger than the full frame Panasonic S1/R.

Get rid of physical shutter and shock absorbers, make space for a smaller IBIS unit, and medium format cameras will become significantly smaller.

But what about the lenses?

In my opinion, Fujifilm should release a couple of compact GF lenses, like the upcoming GF50mm f/3.5 pancake lens. Those would add even more portability to the entire system.

The global shutter will be the 3rd big revolution in recent photography history after the change from film to digital and from DSLR to mirrorless.

For high-end cameras, the GFX medium format system will take the biggest advantage out of the global shutter in terms of size/weight reduction.

And while of course every system has its Pros and Cons, I am actually very optimistic about the future of the GFX system and I respectfully disagree with Tony Northrup.

Now disagree with me in the comments, but do it with style and elegance or at least hide swearwords behind some **** ;).