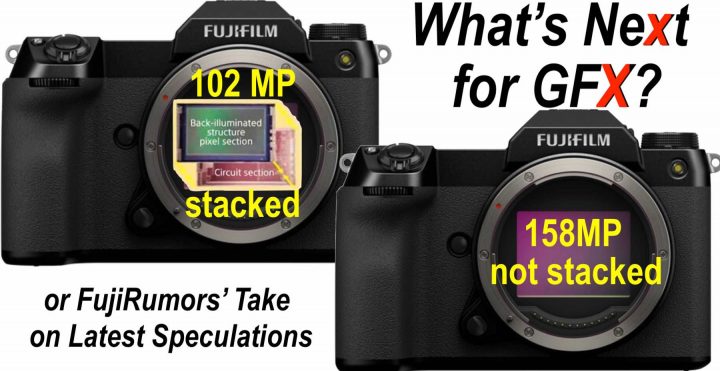 I mean, just take the same sensor on the Fujifilm X-H2S and Fujifilm X-H2, cut it out 4 times bigger area of the silicon wafer, put it in the GFX, and you have 2 new cameras!

Well, first off, nothing is easy.

Here in Forums (me included) we often believe that making this or that is just as easy as going to pick up the milk. However, there is always so much more to it and engineers have to deal with challenges most of us forum-guys are not even nearly aware of.

So let’s go over each of the three camera options speculated just briefly:

I am sure that a massive GFX stacked sensor not only poses an economic challenge (stacked sensors drive up the price of cameras rather quickly), but surely also on the technical side Fujifilm would have to solve some issues that are easier to deal with on smaller sensors.

And also a 150 MP GFX would pose some challenges, because a processor reading out a 40MP file is one thing, but for the same processor to process quickly a 150MP file is a whole other level. Also in this case, challenges will be there that have to be solved. For example, it might require an even more powerful processor, which also would push up the costs to make such a camera.

This is surely the technically speaking easiest camera to make for Fujifilm. The one that would be rather fast to make with the least R&D involved.

Except for the GFX100SMKII, the GFX cameras listed above surely involve some challenges for Fujifilm. But everything can be figured out and therefore I won’t rule out the possibility of such GFX cameras to come one day.

What makes me less confident that such GFX are coming soon (including the GFX100S MKII) is the complete lack of rumors on my side. No rumors, whisper or hints in any shape or form.

This can mean two things:

My thoughts on the two options above:

Well, for now my official position is that no Fujifilm GFX camera is coming in the foreseeable future.

But again, that’s not based on rumors, but rather on the complete lack of them, which makes my current position not really the most reliable ever.

Only once our sources confirm to us that I am right with my speculation, or on the contrary, they tell us I am wrong, only then we will have a more solid indication on what is going to happen with the GFX in the near future.

What I can tell you is that will work on it and let you know as soon as I can.