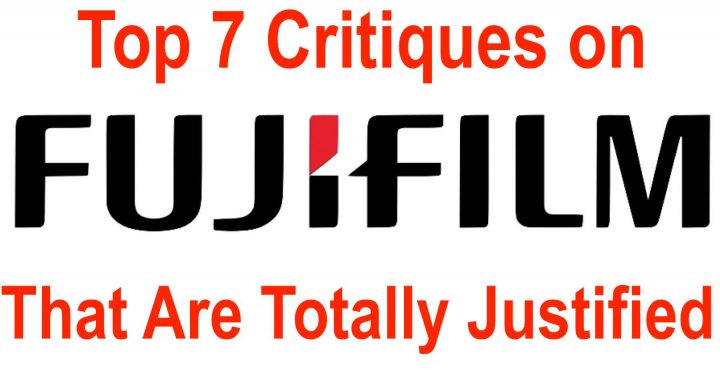 I recently wrote an article, where I list 10 attacks on Fujifilm that do not make any sense.

In that article, I promised that I would also write an article about the exact opposite, meaning sharing a list of critiques on Fujifilm that I totally understand and I agree with.

You can find it down below.

And of course, feel free to add your own critiques on Fujifilm in the comments down below.

Once upon a time, there were only Fujifilm X series cameras with dedicated shutter speed and exposure compensation dials and some even with ISO dial. And quite honestly, the vintage look and retro feel of Fujifilm cameras was the thing that brought me into the system (and still keeps me into it).

When an X shooter talks about re-discovering the passion and fun for photography thanks to Fujifilm, than this retro feel is often the reason for it.

However, lately there is the trend to release more “mainstream” cameras. The latest examples are the Fujifilm X-S10 with PSAM dial and unmarked dials and of course the Fujifilm GFX100S and GFX50SII, with top LCD and PSAM dial.

And while I can understand that Fujifilm is trying to appeal to a wider audience by adding more modern operating cameras to the lineup, a huge part of Fujifilm X and GFX shooters were drawn into the system by the exactly opposite: the retro-touch of Fujifilm cameras.

The Fujifilm GFX50S and GFX50R were still loyal to the retro concept, but everything that followed (GFX100, GFX100S and GFX50SII) went with a more modern layout. And in the X world, the Fujifilm X-S10 is another example of the less-retro more mainstream concept.

And yes, I got one myself, the Fujiiflm GFX100S. And yes, it is stupidly easy to operate and I bought it for the sheer image quality it delivers for what I think is a honest price. But I’d have been more happy to get the Fujifilm GFX100T (or “Omega” as Fujifilm called it in one of their GFX concepts).

So, if running after the mainstream market means dropping or drastically reducing the amount of new vintage styled cameras, then Fujifilm deserves to be attacked for that. And FujiRumors will be first in line with the critics.

Dear Fujifilm, keep all those nice vintage X-Pro, X-T, X100 and X-E cameras in your lineup. Those are the cameras we love and you need to keep developing in addition to the mainstream X-S10 and GFX cameras.

I love the fact that Fujifilm offers different form factors. It’s not like Sony & Co, who “force” you into one design philosophy. So, Fujifilm should keep up with offering different styled cameras.

However, as I wrote in this article here, they should also offer different sensors in the very same camera body.

I warmly invite you to quickly read why Fujifilm should do that by heading over to this article.

There is this notion that Fujifilm autofocus sucks. But it’s not true.

Especially in single autofocus, it is actually fantastic. So much so, that the Pro photographers team at Promirrorless switched to Sony and then back to Fujfiilm, as AF-S on Fujifilm worked better than on Sony. We have written about it here.

But then there is AF-C, and more precisely, the real time AF tracking (which I have described how it works on Fujifilm cameras).

As you might know, I’ve recently shot my first wedding.

My Fujifilm gear performed fantastically, except for one thing: when I tried to use the real time AF tracking a la Sony, it just wasn’t reliable enough that I felt comfortable to rely on it, so I used zone tracking instead, which worked better. I have written about it here.

So yes, if you criticize Fujifilm because of their current real time AF tracking performance, then I agree with that. And also eye-AF could be more sticky. But for zone tracking and single autofocus, there is really not that much to complain in my opinion.

I don’t know you, but I am tired of Fujifilm announcing gear that they can’t ship. And this happened well before the current chip shortage. Just hold on with announcements until you are sure you can actually ship it to customers.

It was one of Fujifilm biggest errors: closing the X mount to avoid third party manufacturers to compete with autofocus X mount lenses. A stupid decision, that has been fixed in 2020, but Fujifilm lost lots of time unnecessarily.

We can just hope that the offering will increase rapidly and especially that Sigma will soon join the X mount.

6) Too many camera lines

So in the interchangeable realm, we have:

Plus the fixed lens:

At this point in time, I think everything with 2/3rd sensor makes no longer sense. Fujifilm discontinued that already, and I agree. A revival of the X10/20/30 line could make sense maybe with a 1″ sensor.

And Fujifilm, don’t even bother to give us a Fujifilm XF10. What we want is the Fujifilm X80. So drop the XF10 line and revive the X70 line.

A must in the fixed lens world is only the X100 line. That must continue forever.

Now to the MILC cameras.

Fujifilm has invested lots effort into entry level lines. And some of you might not know, but cameras of the X-A line were, for a long time, the absolute best sellers in Asia especially in Thailand, beating Sony, Canon and everybody else hands down.

So I get it why we got all these X-A cameras, but the appeal did fade away over the last few years.

Everything that has no viewfinder should just be dropped. So drop the X-A line.

The X-T100 but especially the X-T200 are actually fantastic cameras. And it hurts my heart to say this, but it should be dropped, I mean, the X-T200 was discontinued after only 9 months!!!. Everything that is entry level just takes away times and resources, even though we know that Fujifilm outsources the development of entry level cameras to the Xacti corporation.

And the mid range?

In the long term, between the X-T**, X-S** and X-E line I think only one line should continue, the one that wins at the box office.

Once Fujifilm got rid of all the entry level cameras and rationalized the mid-range offering, this should free up resources to focus on the high end stuff.

Fujifilm has to continue to invest heavily in X-T*, X-H and X-Pro line, making ergonomics the big difference between these lines.

Dear Fujifilm, hire the best firmware guy you can find, and give it all to us: class leading Eye-AF, animal AF (well, you had that already in the past), computational photography features.

Yes, it will be a huge investment, but worth it.

Especially in terms of computational photography, the faster sensor readout of APS-C cameras should allow for lots of possibilities that full frame and medium format won’t be able to match easily. It’s just a matter of putting your money and resources into it.

But to be clear, computational photography should never “take over” and just be an option photographers can chose to use or not. We don’t want a smartphone alike experience, where per default the camera makes all the decisions, but stay in control of everything, and activate only features we want, when we need them.

Sorry, but I can’t make a list of negatives without talking about the camera remote App. Gosh, I even preferred the oldest version, where at least the letters where easier to read than these dark gray letters on black background. C’mon Fuji. Just totally re-write the App. Copy the one of Panasonic!

The deal is the following: save 20% on Capture One 22 pre-upgrades and additional 10% by using coupon code “FUJIRUMORS” (also the old code “AMBFR” still works if you want). 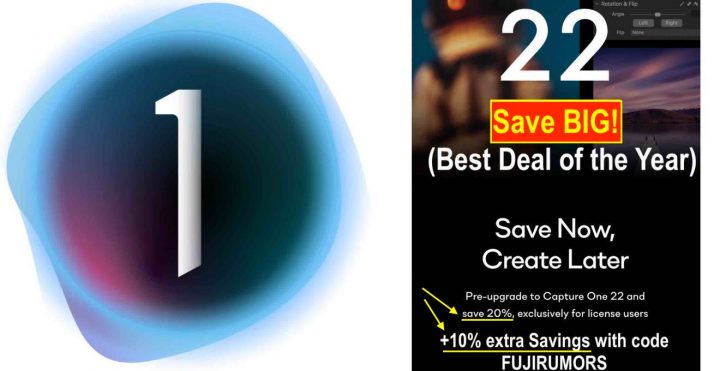