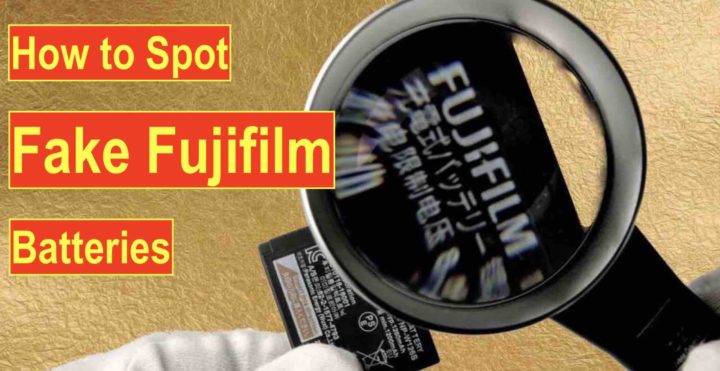 Now, there will always be those, who make a cheap imitations trying to suck a few dollars from your pockets. So we better learn to recognize fakes.

In case of the above mentioned SD-cards, this AmazonUS customer explains here what’s the difference between the original and the fake SanDisk SD-card.

In the Fujifilm world, one of the counterfeit products you might encounter are fake Fujifilm NP-W126S batteries.

Because our recent poll has shown, that the XF35mmF1.4 is the most loved Fujinon lens overall, and I thought that, based on official Fujifilm statements, we try to investigate what makes this lens so incredible popular and loved.

Fujifilm said that, when designing the XF 35mmF1.4, they had 2 choices:

Fujifilm went for the real life use, and the result is a lens, the Fujinon XF35mm f/1.4, that is “decent” according to MTF charts, but amazing in real life. To know more about it, check out the XF 35mm f/1.4 development story at fujifilm-x.

Also Fuji Guy Billy recently said here, that Fujifilm did not want to create a clinically perfect lens, but a lens with character. We could call it a “perfectly imperfect” lens, a unique lens, or, in other words, a lens with a “magic touch“.

I also remember Fujifilm saying a few years ago, that while designing the Fujinon XF35mm f/1.4, they decided to go for a slower focussing lens, because they saw that, with a faster focus mechanism requiring a different internal design, the XF35/1.4 would have lost its “magic“. If I find the article, I’ll share the link here later on.

And now comes the part that will make me extremely unpopular and you will probably ban me from FujiRumors. :)

While working on this article, I thought that maybe Fujifilm should NOT make an XF 35mm F1.4 MK II (which is your first choice for a MK II version according to this poll).

But before you destroy your keyboard while typing angry comments, give me a chance to explain why.

In the light of what Fujifilm officially stated, I agree with what FR-reader (and X-Pro line lover ;) ), PC1512 said here:

“People need to understand that the existing 35 1.4 will never be “updated” with a magic new motor and suddenly be quicker focussing; the optical formula people like so much is the reason that it’s a slower focussing lens, because of the weight of all the elements which are designed to be moved as one unit to achieve focus.

To speed that up significantly you need to change the optical formula, which means it becomes an entirely different lens. Effectively that’s what they did when they produced the 35 f2 – and wisely kept the 1.4 still available as an alternative.”

We love our Fujinon XF35mm f/1.4 for its “magic”… a magic that would probably go lost in a Mark II version.

Do you want weather sealing?

Well, when I destroyed my Fujifilm X-E2 (I had to jump into a river with all my gear), despite my desperate attempts to rescue my X-E2, the camera died forever, but my beloved Fujifilm XF35mm f/1.4 survived, and still today it works like a charm. So I am confident it will survive also if I am catched by some rain.

Do you want faster autofocus?

Try to get a Fujifilm X-T3, which breaths new life into older lenses in terms of AF speed.

I’d love to hear what you guys think about it… and yep, I have my shitstorm helmet on ;). 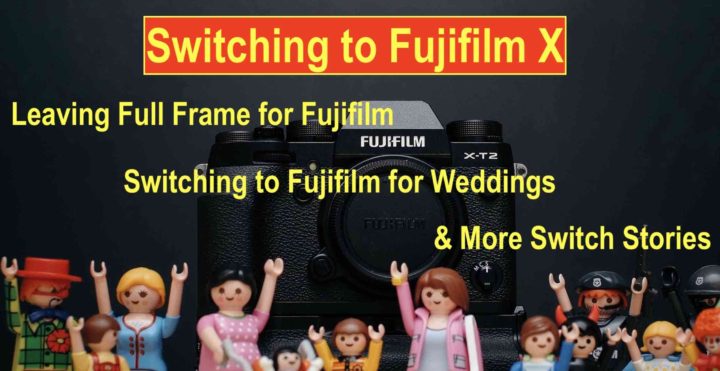 FujiRumors is a 100% independent space.

I wake up, I go to work, I come back home, I blog and I write whatever I want.

This independency allows me to write for example articles like the ones below, that Fujifilm surely did not appreciate:

So actually I don’t think there is one brand out there, that we attacked more than Fujifilm ;).

But my job is not to make Fujifilm happy, but to be loyal to those of you, who decide to read this blog. And hence, I will report everything. Fujifilm does not pay me a penny, and if this blog runs at all, it’s only because you decide to support it.

On the other hand, I can’t hide that I simply fell in love with Fujifilm many years ago, and it’s a love that gets stronger as the years pass by.

So, while I will keep up delivering you everything, every now and then, I also feel like sharing some good switch stories of people, who talk so passionate about Fujifilm.

It’s the same enthusiasm that caught me many years ago, hence, I will share a few of these stories today.

Check them out or not, it’s up to you.

Enjoy your weekend, love you all (even if don’t shoot Fuji ;) )
Patrick 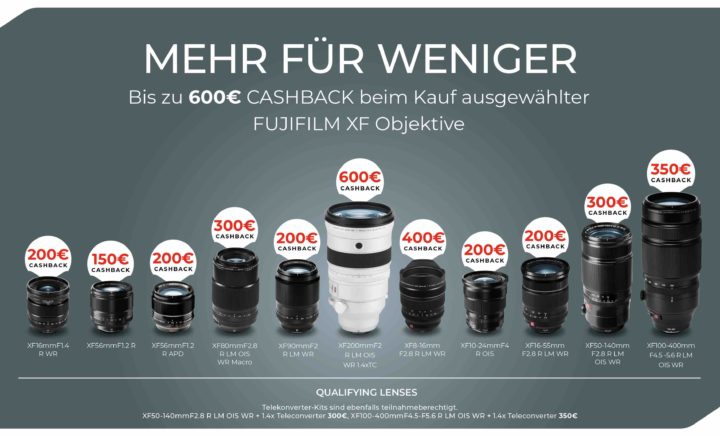 I was just about to make the papers to get a green card for USA and go living there, because USA has always the best deals, but there is no need for that anymore.

These are cashback deals, meaning you pay regular retail price, then head over to fujifilm-connect, select your country and claim back your money.

*Only purchases directly from Amazon (with an Amazon invoice) are eligible for this promotion. Purchases from Amazon Marketplace are not eligible and will be rejected, unless the Marketplace Seller is also a Fujifilm Qualifying (Authorised) Retailer. 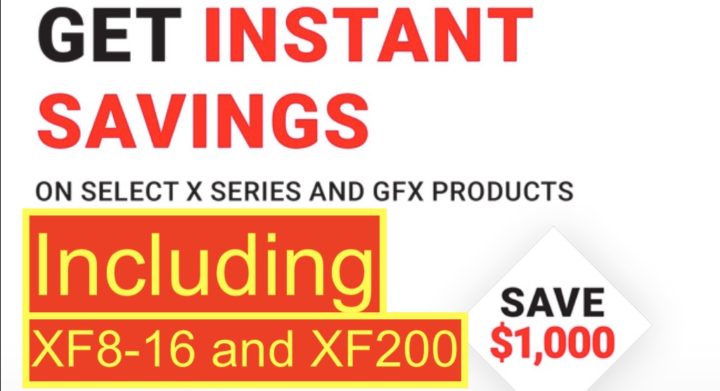 The best Fuji deals of the year are usually the ones between January and March, since the Japanese fiscal year ends in March, hence Fujifilm tries to sell as much as possible to show up with better numbers in front of investors.

So we get new Fujifilm deals, that will expire March 30. 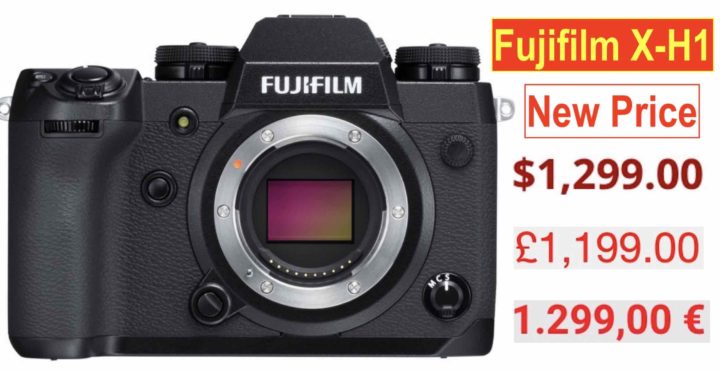 Lately I get many emails asking me if the Fujifilm X-H2 is around the corner, since the price on the Fujifilm X-H1 is dropping drastically all over the world (latest countries to join is the United Kingdom today here).

The reason for the price drop on the Fujifilm X-H1 is not because the X-H2 is coming, but because… well, I have a smart community, and I’m sure you can figure it out by your own ;).

Check out the new prices on Fujifilm gear in your country*:

* in € price might change according to country. There might also be variations in €, £ and $ according to different shops 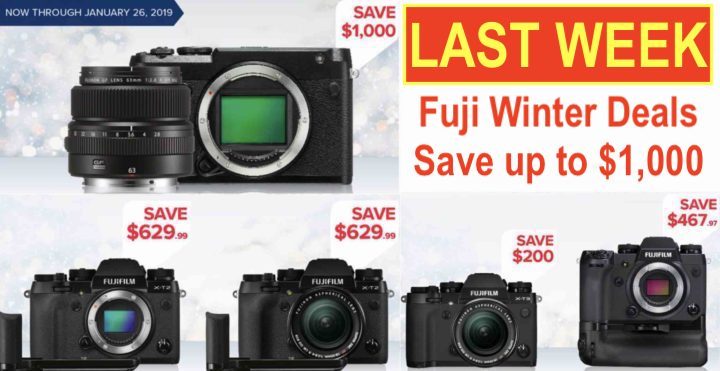 This is the last week, where you cna save big on the following Fujifilm cameras.

Fujifilm will showcase a range of high-quality mirrorless cameras including the FUJIFILM X-T3 and rangefinder-style FUJIFILM GFX 50R medium format mirrorless digital camera, and the newest XF lenses. In addition, the FRONTIER-S DX100 printer, GetPix Kiosk and newly launched Fujicolor Crystal Archive Professional Paper Maxima will be featured at the booth as well as the INSTAX SQUARE SQ20 and INSTAX SQUARE SQ6. 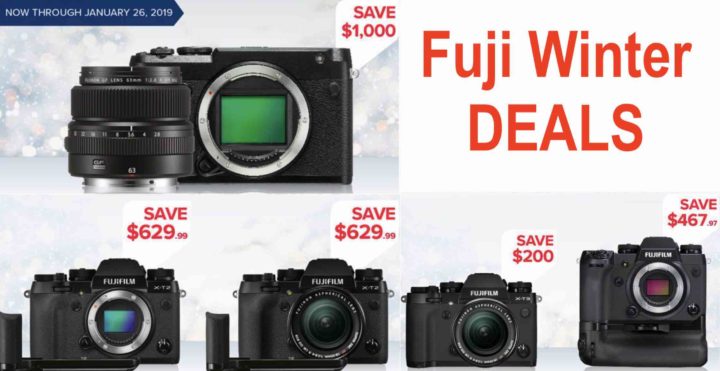 Hence, the Fujifilm X-H1 with grip is still $900 cheaper than just a few days ago, but given the brand new retail price of the X-H1, the savings add up to $467. 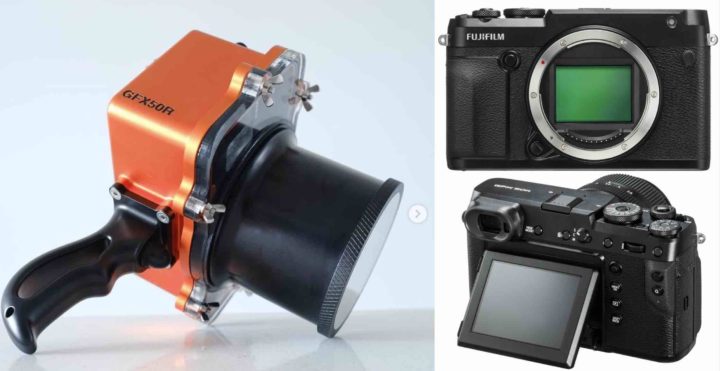