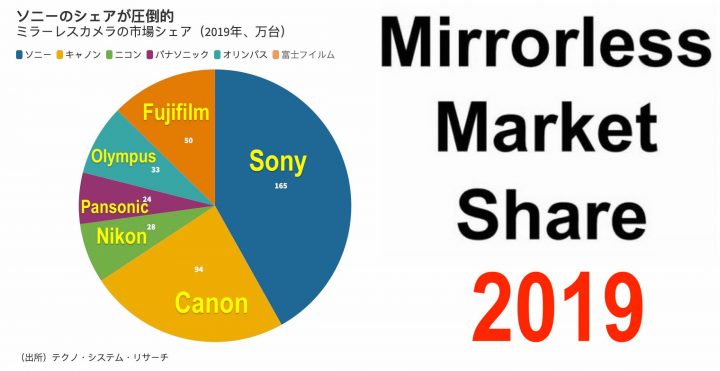 You might remember how back in November 2019, we shared the worldwide mirrorless camera market share data for 2018 here (for the DSLR+mirrorless data check out this article).

Now a year has passed, and Techno System Research, a major marketing research company located in Japan, has published the data for 2019.

Sony is stable, Canon saw a certain growth, Fujifilm is still on the third position, although it loses some points. Olympus is stable. Nikon sees a timid growth. Panasonic slipped down into the last position.

What do we learn from this?

Well, we can say that the move to full frame did not really work out for Panasonic so far. If that says anything, than maybe that Fujifilm did well to avoid to enter that overcrowded market.

Nikon still struggles and if there is one company that I worry most for, then it’s Nikon.

Olympus is out now (sadly).

And what about Fujifilm, which is still on a rather solid third position, but has lost more than other brands?

Let’s see at which cameras Fujifilm launched in 2019.

Two of these cameras were born to be niche: GFX100 and X-Pro3. We can’t really expect them to contribute to gain market share.

The X-A7 should have gone mainstream, but failed.

The only camera designed to aggressively attack the market (and it succeeded) was the Fujifilm X-T30, a best seller for Fujifilm.

So, the X-T30 carried most of the responsibility to fight against all other brands. Other companies were much more aggressive in 2019. And depsite that, Fujifilm was able to stay on a solid third position.

2020 was completely different for Fujifilm. Let’s look at which cameras they launched last year.

You can see that in 2020 Fujifilm was way more aggressive and this makes me very confident that they have strengthen their third position in 2020. I guess in late 2021/early 2022, when the new Techno Research Data is released, we will get my impression confirmed.

Also, consider that many Olympus shooters are now looking for a new “home”, and I got quite some emails in the last few months from Olympus shooters asking me about the Fujifilm X system and what I recommend them to start with. I guess the word has spread that I once was a mirrorless Olympus shooter myself ;).

Fujifilm could be a very appealing system for Olympus photographers, who value compactness and also retro look.

All this combined makes me very optimistic that 2020 was a good year for Fujifilm, despite the worldwide pandemic.

And in fact, Fujifilm managers already hinted that Fujifilm did better in 2020 than other brands.

This statement is backed up for example by the BCN Ranking data (which collects data of 40% of Japanese electronic stores), where you can see that digital camera sales for Fujifilm, despite the pandemic, decreased only by 8%. That’s much better than the 25,8% decrease of Canon, the 39,2% decrease of Sony, and the 39% decrease of Olympus.

Don’t get me wrong: Fujifilm, like all other camera brands, struggled to sell gear in 2020 due to COVID-19, but it seems they struggled much less than other companies. Hence, seen from the perspective of “damage control”, 2020 could be considered a “good” year for Fujifilm.

Sure, we need more data, but so far I think we can be optimistic that Fujifilm has indeed strengthened their third position on the mirrorless market.

You can read the original article in Japanese at toyokeizai via dclife.