I’m packing. I’m leaving. A long car ride all to way to Prague is waiting for me.

But before I leave, here is a blog post about why I bought the X-E3, XF27mm and XF10-24, as well as some initial feedback… sadly also something negative amongst it.

For me an easy decision.

I like the design of the X-E3 more. I like the corner placement of the viewfinder. And if I have to decide between the tilt screen (which I use sometimes), and the joystick (which I use all the time), it just makes sense for me to pick up the camera that has a joystick (X-E3) over the one with tilt screen (X-T20).

X-E3 or X100F? I passed quite some evenings to think about it.

The X100F would give me leaf shutter, build-in ND filter, combined ISO/Shutter dial (which I like), hybrid viewfinder, it would be the ultimate compact travel/street camera and last but not least, it’s the best looking Fujifilm X series camera.

So one evening I grabbed a beer, put all my lenses on my kitchen table and waited for inspiration.

And at some point, my oldest and wisest of all Fujinon lenses, the XF35mmF1.4 spoke to me (at this stage I had more than one beer), and told me:

“You know we are all going to collect dust, if you buy that little sexy X100F. She will tear us apart. C’mon Patrick, think at all the nice moments we had together… and especially all the money you spend to get us.“

Why X-E3 and not the upcoming X-H1

Actually, given Fuji’s kaizen philosophy, probably even better… and Fujifilm is already working on a nice firmware update :)

I also own the Samyang 12, and I will keep it especially for my astrophotography, since it’s a faster F2 lens. But I guess that overall I will use it way less now that I own the 10-24.

Crappy Car Vs. New Gear… or Life’s Sense of Irony 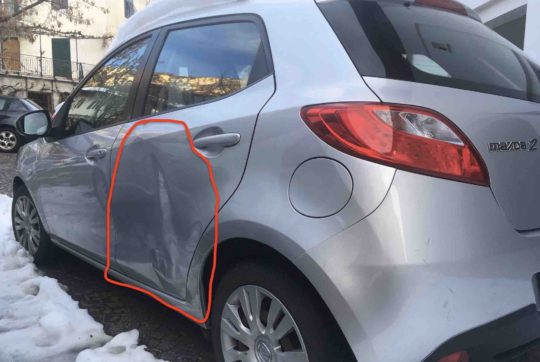 I made the maths, and along with the current cashback deals, it would cost me €1,800. Ok… I worked really super hard, I saved my money, now it’s time to enjoy it wisely :)

I went down to take my car and drive to the store, when I saw…

… that somebody knocked in my car door overnight. I drove to the autobody repairman, he evaluated the damage, and told me he has to replace the entire door… and it would cost me exactly €1,800!

I tried to explain him that my entire old and crappy car isn’t even worth that money anymore… but nothing: new door, €1,800.

Really, life sometimes has a sense of irony.

Luckily having a “nice car” is extremely low in my priority list. As long as it brings me from point A to point B, I’m fine with my old, damaged, small and worthless Mazda2. So, happy like never before, I drove to my local store… with my broken car.

Seller: “We have the X-E3 only in silver“

Seller: “I’m sorry, only silver. But consider that Fujifilm is known for its retro look… and silver is more retro“

I take the silver X-E3 in my hands

Seller: “You see, with the XF27mm the X-E3 is just as compact as the X100F… with the advantage that, if you want, you can change lenses.“

My brain: “You can not not buy it… look how compact. Feel how light“

At this point, I think I noticed an almost imperceptible smile on the sellers’ face. As if he knew, that he did the right thing to trigger my GAS. And he succeeded.

Me: “I can not not buy it… look how compact. Feel how light“

I made the maths… €2,100 all together, with cashback deals. That’s €100 more than my planed max. budget, but I remembered this genius flowchart, which made it completely logical to buy “that lens“, too. At the end of the day, she just wants me happy ;) .

Now, I have read quite some shitstorm about the XF27mm in the comments here. Honestly, I can not understand them.

The very first reason I bought the XF27, is because it gives me an ultra compact combo with the X-E3. The combo is so light, you basically don’t even notice you carry a camera with you.

It might not be Fujifilm’s best lens ever made, but it’s actually an excellent performer for such a small pancake lens. And yes, it’s an F2.8 lens, but for daylight it’s more than enough. And looking at how well the 24MP X-TransIII sensor handles high ISO, it’s a quite usable lens also in lower light

There are so many good things to this camera (that’s why I bought it), that I don’t know where to start. It looks good, takes awesome pictures, it has a great autofocus, it has bluetooth (that will get real-time geotagging in future) it’s compact and a lot more.

I might do a more comprehensive review later on after more testing and when I have more time.

But I will mention just one thing… and it came very surprisingly to me: I didn’t miss the over-sized EVF of the X-T1 for a second!

I guess the joy of having the corner viewfinder overshadows the “sadness” of having a smaller EVF compared to X-T1.

Used without glasses, the EVF is big enough to clearly see everything you need to see.

Again, I need more testing… but here are just quickly some negative things.

… and the Bad – Nitpicking Alert!

Yep, the AF joystick is a Pro. But on my camera it does not work properly. Sometimes, when pushed left, it gets stuck there and the AF point moves like crazy over the screen non stop, as you can see in this video I made. On Monday I will go to my local store and see if they can replace my X-E3 or if I have to send it in to Fujifilm for repair.

I know, sometimes a camera comes with a flaw. So I don’t make a big deal out of it. I’m sure 99% of the other X-E3’s out there don’t have this issue. I was just unlucky.

However, the overall design of the joystick does not really inspire me. It looks quite fragile, but I might be wrong, given that the X-T2 has the same joystick, and so far I have not heard of X-shooters massively returning the X-T2 to fix the joystick. So it might be just a wrong impression I have.

Long term use will tell.

The X-E3 has no D-pad… and that’s a good thing for a camera that small. In fact, if it’d have one, I’d probably keep up pushing buttons inadvertently.

No D-Pad does not mean you lose FN-buttons. You can access 4 “virtual FN buttons” by swiping in different direction on the touch screen. It works smooth and easily.

It’s a minor issue for me, since I rarely wear gloves, and I know there are even special “touch screen friendly” gloves out there.

I didn’t really had enough time to get used to it. But one thing I noticed, dragging the AF-point is not really responsive. I invoke Kaizen, Fuji!

My Bad Luck with the X-E line

My X-E1 got stolen in Greece, and I destroyed my X-E2 because I had to jump in a river to safe my life… and now comes my third attempt with the X-E line, the Fujifilm X-E3.

Time will tell, if the Fujifilm X-E3 will survive in my hands ;) .

Ok guys, I planed to write down this article in 20 minutes, but now it’s 2 hours already (why…. why is my English so bad!).

I really have to pack and go… Prague is waiting :)

… wherever you are, I wish you to make the best out of your day,

Mama and Daddy Mamiya hugging their baby X-E3…
… but FR-reader Didiergm wonders “how Mama Mamiya managed to explain to Papa Mamiya that the new born was a Fujifilm!”