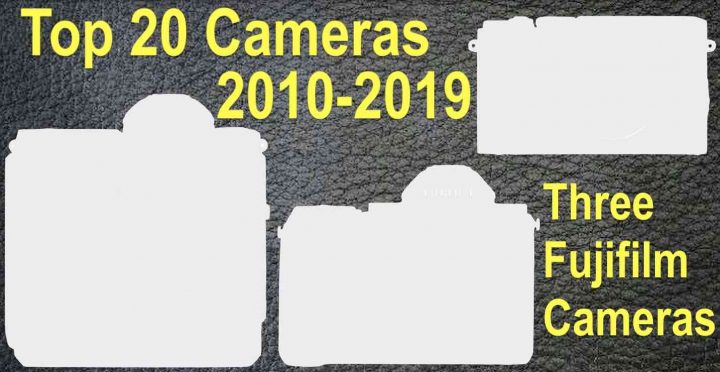 Top 20 Cameras of this Decade

Our second pick from 2010 is another hugely influential APS-C camera, from (at the time) another relatively minor manufacturer. The Finepix X100 represented a completely new direction for Fujifilm, which in 2010 was known as a fairly small-scale camera maker, with a flair for unconventional sensor technologies. Back then the company didn’t have its own lens mount (Fujifilm’s DSLRs were created in collaboration with Nikon) but with the X100, Fujifilm created a product that nevertheless found itself in the camera bags and around the necks of thousands of professional and enthusiast photographers.

Fully agree with this one, as it is the camera, that started it all, and if today Fujifilm is worldwide top 3 mirrorless cameras manufacturer, it’s also because of the X100.

Fujifilm entered the mirrorless interchangeable lens camera market a little late, with a dedicated APS-C platform. Unlike Sony’s E-mount, Fujifilm could never have squeezed a full-frame sensor into the XF mount, and opted in the end to skip full-frame entirely. Instead, the company calculated it had a better chance of differentiating in the medium-format segment, which (with the honorable exception of Pentax) had until 2016 been dominated by a small number of companies making small numbers of really, really expensive cameras aimed mostly at studio professionals.

The Fujifilm GFX 50S changed all that. Offering 50MP from a 43.8 × 32.9mm sensor (close enough to traditional 120 film formats that it is usually referred to as ‘medium format’) it offered 4X the imaging area of Fujifilm’s APS-C ILCs and 1.7X the area of full-frame.

The Fujifilm GFX50S was definitely a game changer in the digital medium format world, and as such, it takes well deserved a spot in the ranking.

Fujifilm’s third camera in this list is arguably its most impressive – ever. The GFX 100 was first announced as being under development in 2018, but hit the shelves in 2019 year with a bang. Or maybe that should be a ‘thud’. Essentially the same size and weight as a professional full-frame DSLR, the GFX 100 is a substantial piece of kit, but given all the technology that Fujifilm packed inside, it’s amazing that it’s not bigger.

The headline feature of the GFX 100 is its 100MP medium-format BSI-CMOS sensor. This offers double the pixel count, and a substantial increase in overall image quality compared to the sensors used in the GFX 50S and 50R. But its resolution is honestly one of the least impressive things about the GFX 100. How about the fact that it’s sensor is stabilized? Or that alongside extremely high-quality stills, it can also shoot superb 4K video? Or that despite its complexity, ergonomically the GFX 100 still behaves essentially like an overgrown X-series ILC?

[…] What makes it so impressive is that the GFX 100 is a wonderfully usable camera.

Personally I believe the GFX system has terrific chances to come out big in the mirrorless war, for the reasons I listed here.

A pity only that DPR did not include the X-T line in the list, a camera so important, that even made it in the Japanese camera museum to preserve it for its future (and so it happened also with the GFX50S).

Back in 2013, Zack Arias was the first to say, DSLR is dead. He did earn massive attacks for that.

But now on the threshold of 2020, we can pretty much safely say that this is correct.

While mirrorless camera sales sort of resist in a dramatically declining market, DSLRs are the once, who take the biggest hit. That’s why Nikon and Canon have been forced to enter the mirrorless market aggressively, too.

The shift to mirrorless is just a natural consequence of technological advancement.

Hence, we can notice that there are only four DSLR cameras named in the top 20 of the decade: Canon EOS 6D, Nikon D850, Nikon D750 and Pentax K-1. On the other side, we have 12 MILC cameras mentioned in the top 20, plus a few smartphones and fixed lens mirrorless cameras.

You can read the full list of top 20 cameras of the decade and vote the survey at dpreview.