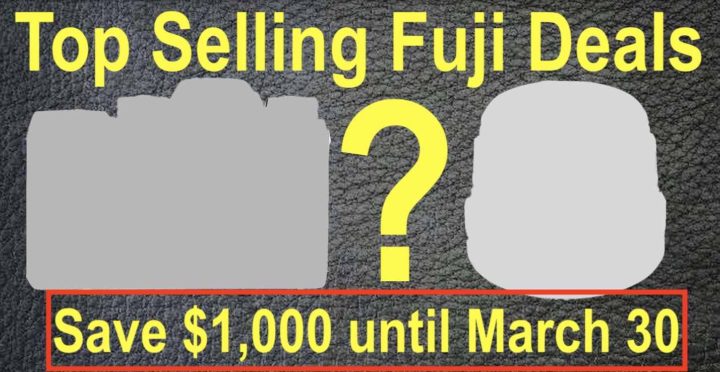 So, the huge Fujifilm X / GFX deals will expire very soon, and I have checked what was the favorite gear the FujiRumors community decided to buy.

And to be clear: the results below are only about Fujifilm gear bought by the FujiRumors community and do not represent the overall sales for Fujifilm.

If you want to see which gear won the best-selling ranking overall in 2018, check out this article.

A true migration to Capture One Pro 12 is taking place thanks to a huge 50% discount, which will end in March.

Fujifilm’s f/2 lens line keeps up being your favorite, and you can get them discounted if bundled with X-T30. But the f/2 lenses sell strong also if not included in the bundle.

When it comes to lens deals only, the XF 16mm f/1.4 wins comfortably, followed by Fuji’s currently fastest lens (until the XF33mmF1.0 hits the stores next year) and the XF16-55mmF2.8, which, in combination with the Fuji X-H1 IBIS, is a fantastic combo.

The recent 1-day-deal on the Mitakon 35mm f/0.95 helped to push sales of this lens on the top.

It’s a head to head race between X-H1 and X-T3, with the X-H1 winning by a very small margin. The new low retail price on Fuji X-H1 definitely helped to push sales, making this camera, in my opinion, best value for the money in the current Fuji lineup.

I guess also the recent rumor, that we will not see a Fujifilm X-H2 anytime soon, helped a bit to facilitated X-H1 sales (I confirm this rumor).

However, the recent X-T30 mega-deal on AmazonUS and the current X-T30 bundle deals helped a bit to push it on the 3rd spot.

Despite the lower new retail price on Fujifilm GFX 50S, the Fujifilm GFX 50R keeps up selling better than the “S”. Fujifilm managers said they were surprised by the 50R demand.

I also just bought the Anker PowerCore+ 26800 PD to charge all my devices on the road, including my Fujifilm X-E3. I am very satisfied with it. If you want to know which other Fujifilm cameras you can charge with, check out this article.

Capture One Pro 12 Deal of the Year

50% savings on Capture One Pro 12 in the following versions: