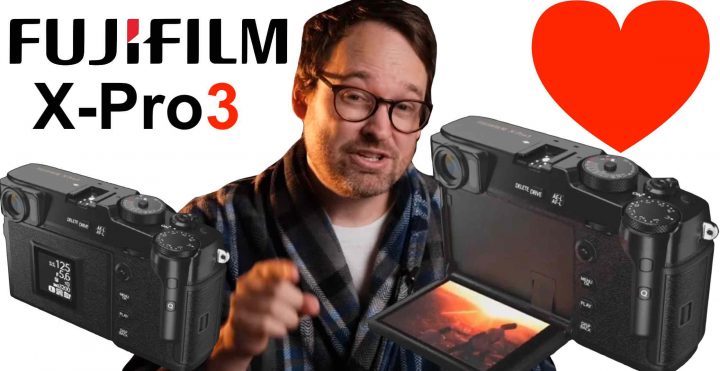 Fujifilm X-Pro3 – A Camera to Hate

Today I thought I try to balance out the X-Pro3 sh*tstorm, by sharing a few stories of people, who actually either like or understand (and hence accept) the new X-Pro3 hidden tilt screen concept.

If you ask me personally, I admit that my first reaction was also something like “what the heck is this?”

But you know what I have learned from reading the massive (and brilliant) essays of Michel de Montaigne?

I have learned that we should try to “suspend our judgment“.

So, I try not to judge and to remain skeptical.

Only after I was able to try, feel, shoot and experience the Fujifilm X-Pro3 by myself, I will judge it!

Because I actually never used it… did you?

Fujifilm X-Pro3 – A Camera to Understand

Maybe Fujifilm should go the safe route and do it like Sony: focus on one mainstream camera body style, regurgitate that same form factor over and over again and “force” photographers to adapt to that specific photographic experience.

Surely, that would guarantee Fuji much higher return of investment.

But if I have understood something in about 8 years of Fujifilm blogging, is that offering tools for all kind of photographers is at the core of who they are at Fujifilm.

They play around with the form factor, in order to deliver such a variety of camera bodies, that it will be easier for everyone to find that one camera, that suits his/her photographic, artistic and creative needs best.

The Fujifilm X-Pro3 was crafted for the niche, this is why I don’t think Fujifilm cares much, if many don’t like the hidden LCD screen, as long as there are some, who like it.

Fujifilm has photographers in mind.

All kind of photographers.

And somewhere out there, there might be some, waiting for exactly something like the Fujiflm X-Pro3, and down below, you’ll find a few of them.

He goes on saying he likes the Fujifilm X-Pro3

Gajan Balan shares his thoughts about the Fujiiflm X-Pro3

Gemini Connect also share his X-Pro3 video and wonder, who this camera is actually for:

And we close with a few blog posts starting with Olaf, who over at olafphotoblog writes:

I have great respect for any company that is not afraid to rethink their design and introduce something new. You need bold decisions and people in charge who are not tied to their corporate chairs to make such risky decisions. We should applaud it, not criticize.

Then there is also josephdagostinophotography, who, among the others, writes:

I myself love it but maybe that’s because I understand it. […] What we have in the new X-Pro3 is a pure simplistic approach towards photography. […]. If you hate it then perhaps your just not understanding it […]

We in turn should be celebrating a company so willing to risk a move as bold as this. They are making a statement that they are putting the pure art form of photography first […].

As a lover of film I couldn’t be happier at this new design. It is to be taken serious in its minimalist and classy approach. […] A discrete flip down screen for waist level shooting which I’ll admit was on my wish list. An informative and also retro style rear LCD which is reminiscent of film cameras with their film stock tab holders.

If your a photographer who loves the history of photography and not gadgetry then whats NOT to like? The XPro-3 is sure to slow you down and force your eye to the viewfinder while studying the application of your craft.

If anything, no more beat up scratched LCD screens either. NO MORE CHIMPING!!!

And finally, here is what visualsciencelab has to say:

I love it. I love it because it will save battery power, not distract me, and it’s a complete repudiation of composing and shooting on what should (on all cameras) be just a screen for menu setting and leisurely image review. I love it when a major camera maker’s design initiatives coincide with my use profile prejudices. It shows me that there are still sane and logical camera users out in the world.

In summary, sight unseen, I like the newest addition to the Fuji X-Pro collection and plan to buy one.

And don’t forget to: