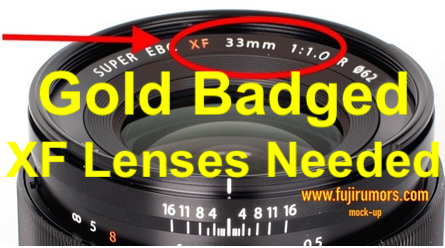 The eXodus to Fujifilm

“If you [Fujifilm] do that [F1.8 zooms] and give me a sensor stabilized camera, that would put you in the same league as Full Frame Canon, Nikon and Sony and we can see a lot of professional photographers switching over to your bodies.”

Now, there is a thing I agree with, and one I don’t agree.

I don’t agree with statement that “lot of professional photographers” will switch to Fujifilm, once they release fast F/1.8 zooms.

The eXodus from other systems to Fujifilm is already happening, and there are lots reports out there already about professional CaNikon shooters switching to Fujifilm. In fact, I guess that many of you guys reading this blog might have such a switch story to share, too.

I agree, however, that despite offering the vastest lens range in the mirrorless APS-C world, there are still some lacks to close, and there are some photographers, who still need THAT particular lens, before they can switch to Fujifilm completely…

… and Fujifilm now has to “attack” those niches… with niche glass.

The upcoming XF200mmF2 is one of these lenses. Tilt shift lenses are missing, too. And as Tony says, probably there are also some waiting for a fast F1.8 zoom lens before they feel comfortable to switch completely to Fujifilm.

With that said, I believe that for most professional photographers, the current lens lineup is big and various enough to switch 100% to Fujifilm.

But even those, who already switched 100% to Fujifilm, still have ideas and wishes for future lenses.

In fact we even launched a gigantic future lens poll, with about 1,000 lens wishes you guys shared and I condensed into a selection of 30 lenses you could vote on. The results can be found here.

No matter if you agree with Tony Northrup or not, in any case he made a good thing to raise the question, what is needed to make the Fuji X system appealing also to those photographers, who still hesitate to switch to Fujifilm.

So I thought about it… and here is what I think Fujifilm needs above all else.

A few super fast “Gold Badged” lenses, such as the XF33mmF1.0, a lens that disappeard from Fujifilm’s internal roadmap, in favor of the smaller and cheaper F2 Fujicron lenses.

I know that inside Fujifilm, there are a few, who insist to make the XF33mmF1.0, but it’s hard to convince the decision-makers at Fujifilm to take “risks” with an expensive glass, when all those nice little and affordable F2 lenses bring so much money to Fujifilm.

But now that 2018 is here, it’s time to express some wishes, and I would love to see a new Fujinon line of gold badged lenses, so that Fuji’s lineup would be like this:

And to be clear… Fujifilm is already offering many fast F1.2 and F1.4 lenses. And personally, for my needs, this is plenty of fast enough.

But having some even faster and “extreme” options never hurts.

And yes, even with an 33/1 lens, many of us would maybe end up using the smaller XF35mmF2 more often anyway, but we would know that, just in case, we’d have that ultra-speedy F1 lens option available anytime.

So, I know Fujifilm I am stressing and stalking you with this request… but in the name of many Fujifilm lovers out there, please, put that nice XF33mmF1.0 lens back on your roadmap for 2018/2019.

I guarantee you, that once it’s out, many of us will have one of those “Shut Up and Take my Money” moments :) .