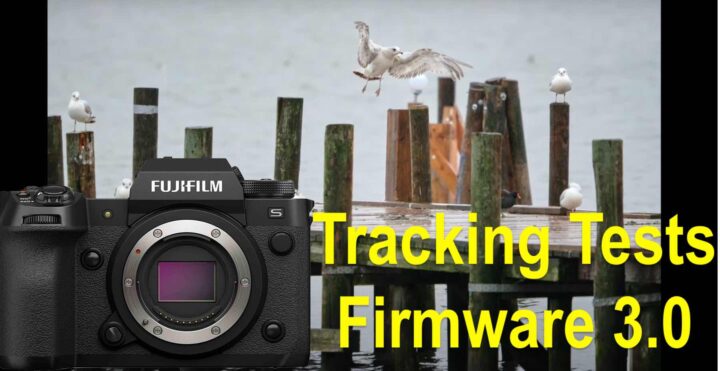 Ha We eN posted on his youtube channel a series of images taken with the new 3.0 firmware tracking seagulls (video below).

Jerred Z has criticized the autofocus of the latest Fujifilm cameras in several videos. He was also not impressed by the X-H2s autofocus.

In fact, last week he tried to shoot birds and the X-H2s did not perform as he hoped.

So now he updated the firmware and decided to go back to the same spot to photograph the same birds but with the new firmware.

Well, this time he is very happy with the results.

He noticed immediately that the AF was improved. Subject acquisition is quicker than before. Even when the bird’s wings are partially covering their face, the camera still focused on the eye of the birds.

It happened sometimes, though, that when other birds where together in the frame, the camera sometimes jumped to the other birds and focused on them.

He is super impressed by the overall hit rate (he uses also lots of the newest Canon and Sony).

The X-H2s now rocks. At least the X-H2s has as good autofocus as pretty much anything out there.

Jason Halayko Photography took 2,228 images when testing the camera with the new firmware under a variety of tracking situations (extreme backlight, fast moving subjects, acrobatic street dance, far away subjects and more – including Shibuya crossing). He missed 168 images. So the camera hit rate was of  92,5% (7.5% missed shots).

But if he was to remove the Shibuya crossing (hundreds of faces packed together all moving and the camera struggled to focus on his subject that was constantly covered by people passing by), where he would not have used tracking anyway usually, then he took overall 1,560 images with only 70 missed images. That gives a 4,5% missed shots and 95,5% images in focus. Slightly out of focus images are counted as missed images.

And looking at the missed images, than you realize it’s not that bad of a hit rate.

Google translate is not the best friend here. But there was a big black coat behind the very rapidly moving subject, a dancer (also dressed in black), and sometimes the AF of the X-H2s confused the black coat with a person.

It seems to me that happened especially when the dancer, who was jumping and turning around quickly, did not have her face clearly in front of the camera. At that point, the camera could focus on the coat. In ths case, the Sony did better and was not so confused by the coat.

Overall, in terms of eye AF and tracking stickyness, the reviewer says Fujifilm is about 80-90% as good as Sony.

Very close, but let’s make it 100% via another firmware, dear Fujifilm.

I will share a few more videos showcasing the face/eye detection. All looks fantastic there too, with the camera being able to recognize subjects that are really far away.