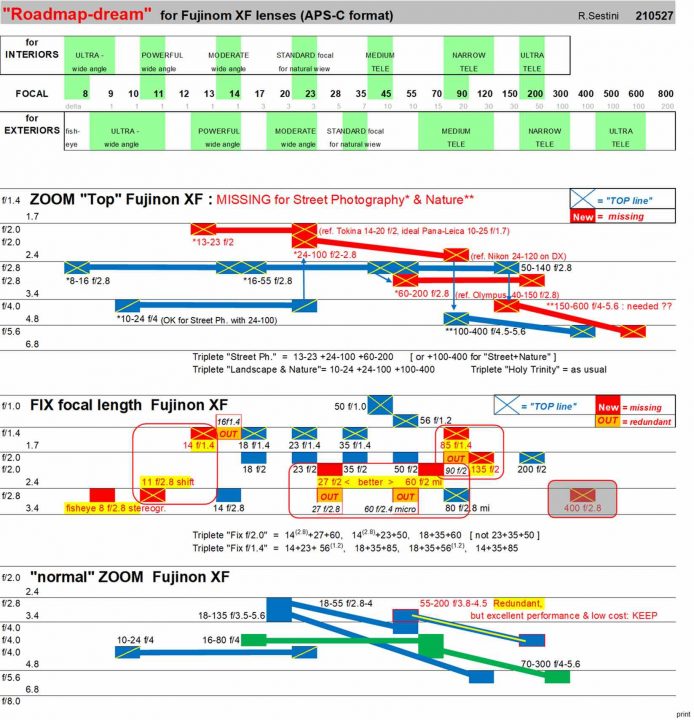 FR-reader Roberto contacted me with a long and very interesting email regarding on how Fujifilm should develop their lens lineup in future. In fact, I thought it is a pity if I’d discuss this topic only via email with him, so I’d love to extend the conversation to the entire FujiRumors community.

Also, it is a known fact that Fujifilm reads FujiRumors, not only thanks to the fact that high ranked Japanese manager “love” Fujirumors, but also because they look at our survey and use them internally, in some cases even implemented 1:1 the lens wishes the FujiRumors community wanted in their official roadmap.

No wonder, as there is no place on the web that connects so many Fujifilm shooters like here on FujiRumors.

FujiRumors is the best place for Fujifilm to get online feedback from their customers, and knowing this, we take full advantage of it, also by sharing articles like the one Roberto wrote for us, which I think contains some interesting feedback that will end up discussed internally by Fujifilm, and who knows, maybe at some point will also become reality.

So, Roberto did his job wonderfully, I do mine and share it here… but now it’s your time to do yours, by reading the article and discussing it in the comments.

How Fujifilm Could Improved their X Mount Lens Roadmap

I follow your site carefully, being an early adopter of the Fujifilm X-system and an enthusiast of the Company approach to photography, which you help us follow through your insides and rumours. I’m not used to be on socials, but I make an exception so to share some ideas on Fujifilm APS-C strategy and how it could translate in an improved XF lens roadmap. I try to do so as a contribution in Kaizen style, as a voice from a customer which could be of interest for the company (FYI, I’m one of the very first Kaizen managers certified in Europe by Mr. Masaaki Imai in person, in 1990-91, and during my career up to top-management positions I tried to apply Kaizen not only in Manufacturing, but up to the strategic and support functions of international groups).

This time I will focus on lenses, and since every lens is part of a system and answers a unique offering of a given Company, let’s start from some consideration on the Fuji XF product strategy.

When I purchased my first X-E2, I was attracted by portability in comparison with my 3 or 4 DSLR’s with some 20 lenses; I did like it. Next step was to invest in a set of 3-4 lenses, and I did discover the core of Fujifilm offer, the superior quality of the lens design coupled with the in-body lens corrections and the Fujifilm “colour science”, with an excellent balance in each lens between mass-market performance like sharpness, and “character” (bokeh, longitudinal CA when compared to my Nikon’s, and much more): I did love it.

So the system grew from 3-4 to 10 lenses, I did buy a used X-E1 as back-up for long trips, and an X-H1 to get, when needed, stabilization and grip. But here the story stopped: I had all the lenses of my interest, 20 MPix was the maximum I needed, the X-T4 was a sort of duplicate for my APS-C Nikon DSLR system, and I was just waiting for a stabilized X-E2. To my surprise, I started “playing” again with the D7200 and buying some “niche” lenses, which did re-activate that system despite the evidence that it is too heavy for bringing it in a long holiday trip, and too big to avoid intimidation.

So, I tried to rationalize my feelings and expectations on the Fuji XF system: at the base is the easiness to get excellent quality at each picture, it has the right “understatement” and controls needed in street-photography, and the “portability” to pack the 5 lenses needed for a specific journey in a light bag where a DSLR stops at 3 lenses (even if APS-C, and including the X-T4 which is too big). This makes Fujifilm shine, but also what makes the Leica-M system immortal, what supported Olympus till today, and what Sony is approaching for the first time with the  Sony A7C and the f/2.5 lenses, in parallel with their attack to professionals.

Evaluating the wide offering of XF lenses, I’m convinced there will be no credible competition on the market for a long time both in term of performance and portability, due to the price of the Leica FF lenses, Olympus/Panasonic limits of M43 light-gathering, and Sony’s dimensions of FF lenses (they made the same error as Canon and Nikon on the APS-C lenses, so the 6000-series is not a competitor, and now they have to face the reaction in the FF arena: good luck). Still, I was buying lenses for the D7200 ….. what was missing?

My first comment to the Fujifilm XF lens roadmap is that it has been almost perfect till now, but has reached a limit (materialized in the 50mm f/1 an the risk of cannibalization between near products) which suggests new directions. To my eyes, the part to keep is obviously the optical performance, and please pay attention to it. The part of the lens strategy to improve, rotates around 2 aspects: the opening and collaboration with third-party manufacturers, and the kind of photography that the lenses should promote.

I speak of Third Party manufacturers at first, because it’s obvious that the business case for new developments is becoming more and more difficult, and further more if you think niche products, so the direction I see is to co-develop lenses with them giving the opportunity for them to sell on other mounts, relying on the substantial difference between Fuji-X bodies (and the basic offering of home-made lenses) and the competitors’ ones in the APS-C arena.

For the potential new lenses in the XF roadmap, I suggest that they are designed to “promote” that kind of photography which I described above, meaning street-photography and on-the-road holiday photography done by “normal people”, and that they are sufficiently “niche” and “unique” to further separate the Fuji-XF offering from that of the APS-C competitors.

Coming back to the “niche lenses” which did re-activate my D7200, they inspired me the following possible additions to the Fujifilm offering:

Apart from this set of 3 lenses for street photography, I see also opportunities to rationalize and complete the range of fix-focus XF lenses as follows:

In conclusion, I tried to explain my expectations for the XF product strategy, and my suggestion for lenses, which I did put in a graphic to facilitate the overall view and evaluation. I may come back on my dream for an X-M1 (the stabilized X-E2, or “missed X-E4”) and on the segmentation of bodies separately for the reflex- and rangefinder-styles, but glass is what counts, even when we will enter in the area of computational photography.

What do you think about these thoughts and dreams? Let me know, thanks!
Roberto