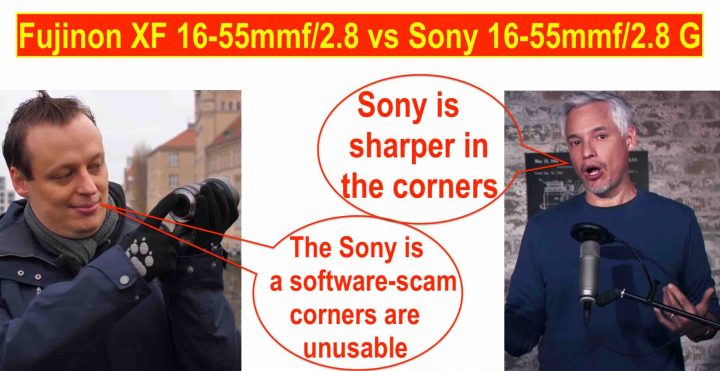 DISCLAIMER: don’t get mad at me. I just report what reviewers say. And I believe it makes sense to report it all

Are you ready? Let’s go!

In his latest video, Tony Northrup says that at the wide end the Sony 16-55 f/2.8 G is sharper than the Fujinon XF16-55mm f/2.8 in the corners, whereas German youtube channel ValueTechTV goes so far to ask himself if, at the wide end, the new Sony lens performance can be called a “software-scam“.

ValueTechTV (German video below) says that it has a brutal vignetting at 16mm, and he believes this could be due to the light hitting the last plastic part of the lens, hence projecting a strong black area in the corners (screenshots below).

So, if not heavily digitally corrected, the image in the corners results totally unusable.

Now, since the digital correction information is baked into the EXIF, when you import your file into Lightroom or Capture One, you don’t notice it, as it is completely corrected already.

But ValueTechTV says, that, due to the heavy correction and crop that the camera applies, you end up using only 18 or 20 megapixel, and not all 24 megapixel of the camera. In the comments ValueTechTV also says that after correction it’s more of a 17mm lens at the wide end.

They end up saying:

Are you serious? I should pay over $1,000 to get a lens that is unusable at the wide end, if not used with heavy software correction? […] I don’t understand what Sony was thinking, when they released a $1,400 lens so weak in the corners at the wide end.

Well, I believe that this could explain why the Fujinon XF16-55mm f/2.8 is bigger than the Sony 16-55 f/2.8 G: you don’t get those unusable corners that require massive correction, cropping, and software magic.

And now to Tony Northrup.

He reviewed several common Sony and Fuji APS-C lenses to determine which is sharper and the better value.

Tony ends up saying that both lenses are very good, but the more expensive lens (Sony) wins, says Tony Northrup. And let me add also the 4 years newer and more modern Sony lens.

FujiRumors recommends Tony to try Capture One. FujiRumors switched to C1 and wrote an objective article about the Pros and Cons of X-Trans here.

Tony says the Sony lens costs $145, but I don’t see that price at BHphoto.

Seems like with APS-C you get quality for much less money, an intuition Fuji X Shooters had already a long time ago ;).