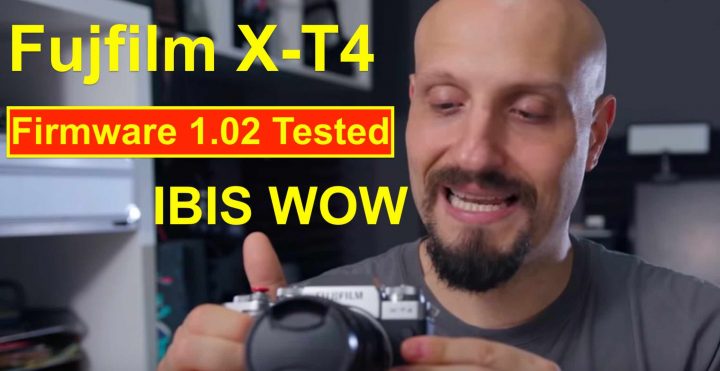 Fellow Italian X shooter Mario (who is a professional videomaker, formely shooting Canon, then leaving Canon because he fell in love with the Fujifilm X-H1) has shared a video, where he compares the IBIS on the Fujfiilm X-T4 with firmware 1.01 vs. firmware 1.02.

Now, if you don’t understand Italian, you probably want to see the video samples, and get a summary of what he says…. well, I did it all for you down below. :)

So let me guide you through this, since I am Italian, too :).

Also, fellow German speaking X shooter Pascal shares his feedback about firmware 1.02. Luckily I am also German native speaking, but in this case, Pascal makes the video in English. I’ll include it down below.

He also says “I can’t say any issues that come from the IBIS anymore”.

First, he shows of the issue, where the IBIS on the X-T4 makes micro movements to try to catch up with the movement, that result annoying. That demo starts at minute 1:22, and every time there is the unwanted IBIS shift, you’ll hear a (funny) sound signal.

He says, the issue “sometimes” appears, especially when you start to move the camera, and the IBIS jumps.

He first attributed this to his error, but he is a professional videomaker, and he knows how to move a camera and knows he is skilled in filming handheld. So it’s an issue with the X-T4.

He says that now it’s clearly better. The camera stopped to jump without any reason.

He says “Wow, I think this is one of the most evident improvements I ever saw on a camera via firmware update“.

The Fujifilm X-H1 had the same issue, and he wants now an update for the Fujifilm X-H1, too. If the X-H1 would get that firmware update, too, it would have an unbeatable value for money ratio. As of now, the X-H1 is a very high end camera at a ridiculous price.

He concludes by saying… thank you Fuji :)