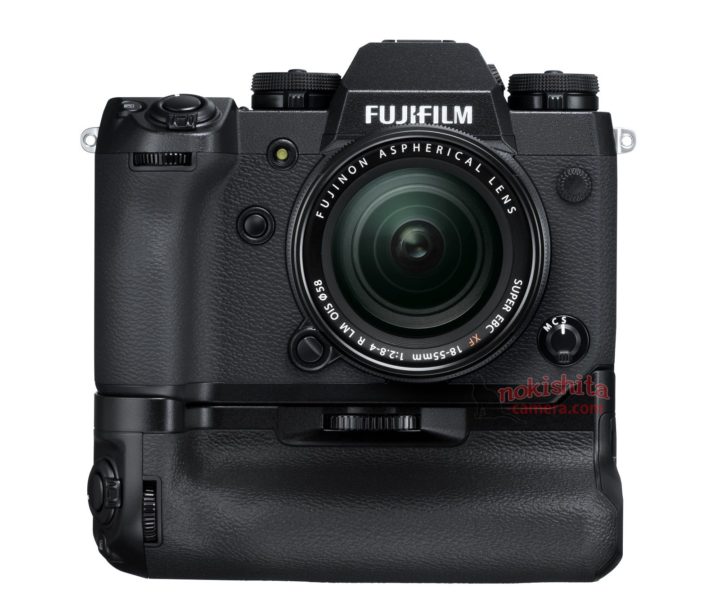 We have already leaked the images of the Fujifilm X-H1 yesterday here. It great to see now confirmation from nokishita, who even leaks the entire specs sheet of the X-H1 :)

Also to be announced on the 15th, a firmware update for the Fujifilm GFX (will bring focus braketing) and X-T20 (improved AF)

Kleve, February 15, 2018. Professional picture quality, robust housing and advanced video functionality – with the FUJIFILM X-H1 mirrorless system camera, FUJIFILM has added to its award-winning X series the hitherto most powerful model. It offers a number of features tailored to the specific needs of professional photographers and videographers.
The X-H1 has a newly developed, extremely robust housing and is the first model of the X series to have an integrated 5-axis image stabilization (IBIS), which can be combined with FUJINON XF lenses up to 5.5 steps * 1 longer exposure time. times allowed. In addition, it has a flicker reduction mode, which guarantees reliable exposure results even in difficult lighting conditions, thereby significantly improving, for example, the quality of indoor sports photography.

The camera fits perfectly with the new professional FUJINON cine lenses MKX18-55mmT2.9 and MKX50-135mm T2.9 for the X bayonet, both of which are announced for May 2018. It is of course also compatible with all existing XF and XC series lenses, which will be available by the end of the year the high-speed telephoto lens XF200mmF2 R LM OIS WR and the ultra-wide-angle zoom lens XF8-16mmF 2.8 R WR is extended.

The FUJIFILM X-H1 will be available from March 2018 onwards.

Vibration-free closure
The closure is based on a spring mechanism that minimizes the finest vibrations inside the case. With the electronic first shutter curtain and the completely electronic shutter, vibration effects can be almost completely eliminated.

Outstanding picture quality
The X-H1 features a 24.3-megapixel X-Trans CMOS III Sensor * 3 without low-pass filter and a powerful X-Processor Pro. The same combination is already being used in the internationally award-winning professional X Series models X-Pro2 and X-T2. Combined with the high-quality FUJINON lenses and FUJIFILM’s over 80 years of color reproduction experience, the X-H1 produces outstanding images. Even the finest details of the texture of objects are reproduced with a high plastic appearance, which captures the unique atmosphere of a scene in a special way

Robust housing
The case of the X-H1 is made of a sturdy magnesium alloy, which is 25 percent thicker than the X-T2. Although the camera is thus much more robust and stable, the housing is compact and lightweight thanks to a new mounting of the bayonet ring. The X-H1 is dust and splash-proof and fully functional even in cold temperatures down to minus 10 ° Celsius. The outer coating has a surface hardness of 8H due to larger particles and is thus particularly resistant to scratches.

Viewfinder and LCD
The electronic viewfinder with a resolution of 3.69 million pixels and a 0.75-fold magnification offers a leading performance in the segment of mirrorless system cameras. Due to the ultra-short response time of just 0.005 seconds and a fast frame rate of 100 frames per second, movements in the viewfinder image are extremely smooth. Even with dynamic subjects, the photographer can determine the image detail very precisely and compose the image exactly according to his own ideas.
The 7.6 cm (3-inch) touch-screen LCD on the back panel folds and pivots in three directions. It has 1.04 million pixels. As with the mirrorless medium format camera GFX 50S, the most important recording parameters are also easy to read at any time on the X-H1 on a 3.25 cm (1.28 inch) shoulder display.

Optimized usability
At the suggestion of professional photographers, the operating concept of the X-H1 has been optimized compared to other models of the X series at a total of 19 points. So the camera is even better in the hand, for example, because of the larger grip.
The X-H1 triggers extremely quiet, making it ideal for situations where complete peace of mind is required, such as when taking in wildlife, at concerts or at weddings.
In addition, the buttons on the back of the camera have been enlarged and the grip of the dials improved. On the back there is a new AF-ON button, via which the autofocus can be activated by means of a thumb released from the trigger. With the help of the focus lever, the focus point can be very comfortably and quickly moved to the desired position.

Varied video features
The X-H1 is the ideal tool for multi-media productions that are standard in many areas today. Its video function has a total of 20 performance and performance improvements, making it ideal for professional filming.
It is the first camera in the X series to offer ETERNA film simulation, whose subtle color reproduction and richly detailed depths open up many creative freedoms for post-production users. In addition, for optimum picture quality, videos can be recorded at a high bitrate of 200 Mbps.
The camera also offers Cinema 4K recording in 17: 9 format, DCI 4K recording 4,096 x 2,160, Full HD recording at 120 fps for slow-motion (2x, 4x, 5x), F-flat Log * 4 and timecode recording and 4K F-Log recording directly to SD card, 400% dynamic range (approximately 12 f-stops) and a built-in high-quality microphone (24-bit / 48 kHz).

Flimmerreduzierungsmodus
The flickering of artificial light, which is practically imperceptible to the human eye, for example in a sports hall, can falsify the result of the exposure measurement. To avoid this effect, the X-H1 has a flicker reduction mode that guarantees reliable metering results even in difficult lighting conditions.

Improved AF algorithm
The X-H1 autofocus features an improved algorithm that significantly improves the accuracy and speed of focusing in low-light situations. Thus, the sensitivity of the phase detection AF has been improved by about 1.5 f-stops from 0.5 LW to -1.0 LW, so that it can now also be used with lenses with aperture up to F11, for example the XF100-400mmF4.5- 5.6 R LM OIS WR with teleconverter XF2X TC WR.
Motifs with finely detailed surface structures (eg plumage or fur), which were previously not optimally captured by phase detection AF, can now be focused quickly and precisely.
In addition, the performance of the continuous AF (autofocus) during zooming has been significantly improved, which is advantageous, inter alia, in situations in which the main subject moves unpredictably (eg sports footage).

Optional accessories (sold separately)
Portrait battery grip VPB-XH1
The battery grip, designed exclusively for the FUJIFILM X-H1, maximizes the performance of the camera. It can be equipped, in addition to the battery in the camera, with two more batteries, so that up to 900 shots are possible. Boost mode speeds up the continuous shutter speed, frame rate and camera response time, and further minimizes the minimum blackout time. For 4K film recordings with a battery grip, the maximum recording time is extended to around 30 minutes.
The battery grip is dust- and splash-proof and ready for use at temperatures down to -10 ° Celsius. The controls include the shutterinc release button, focus lever, AE-L button, AF-ON button, thumbwheel, Q button, and Fn button. This allows the camera to be operated very comfortably even in portrait position.
The VPB-XH1 has a headphone jack to monitor sound during video recording. There is also a connection for the
Supplied power supply (AC-9VS), with which the two batteries in the handle can recharge within about 2 hours.

Eyecup EC-XH-W
This large eyecup for the X Series and GFX Series cameras completely covers the area around the eye. The incidence of light rays is so effectively prevented and the photographer can observe the subject over a longer period of time concentrated. The eyecup can be rotated in 90 ° steps, so that it can be adapted for both the left or the right eye as well as for portrait shooting. An antistatic coating prevents the adhesion of dust and dirt. 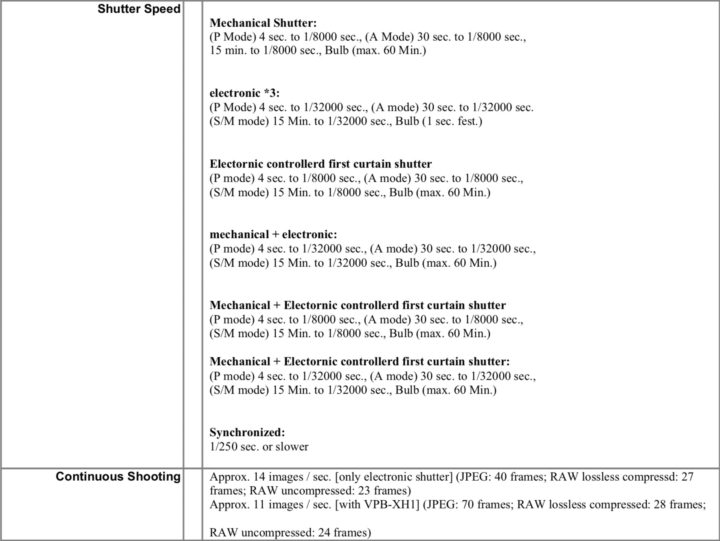 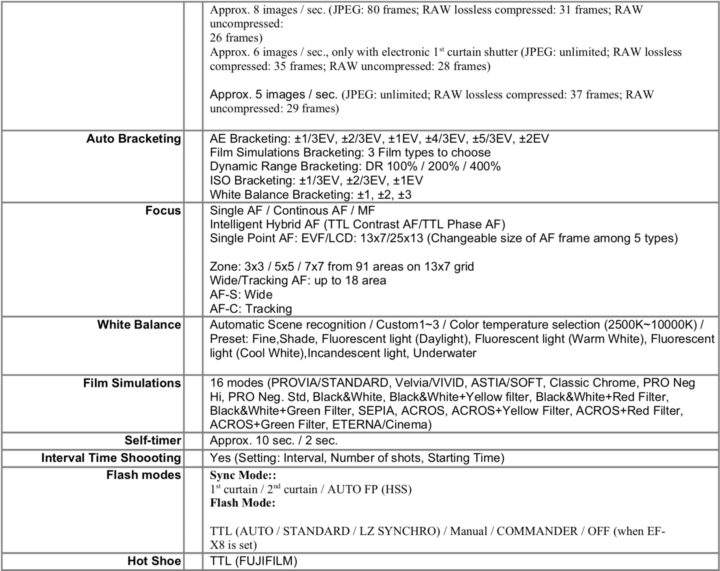 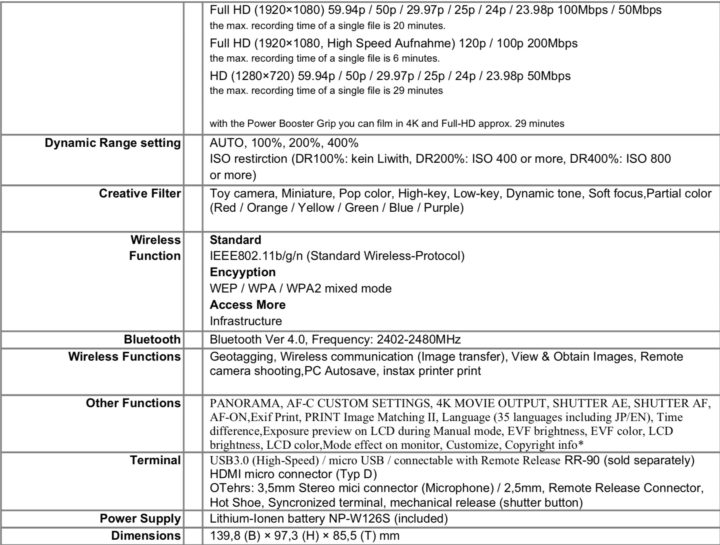