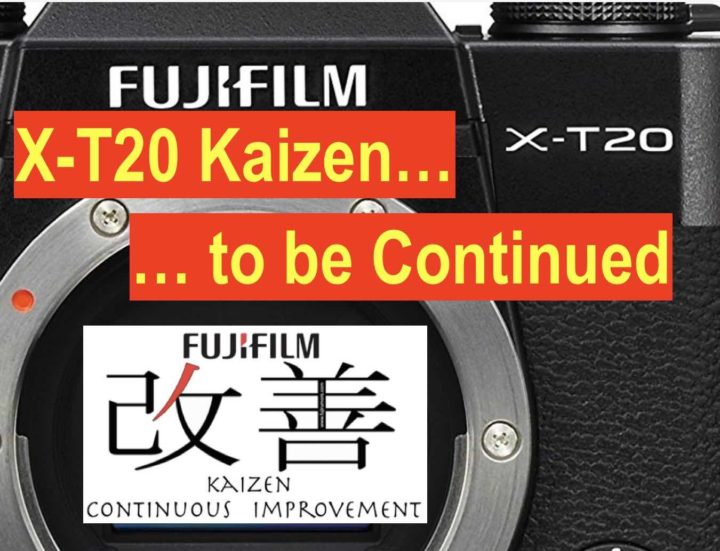 I know that most of you guys read the articles I write from the top to the bottom, and then give great feedback and make interesting questions (I will answer below).

But I also know that sometimes some of you are in a hurry and might just quickly scroll through the FujiRumors news feed while going at work or so, and hence might read just the headline. Or sometimes maybe I was not clear enough, thanks to my wonderful English skills ;)

Anyway, the result is, that after yesterday’s article, some people started to panic a bit: “Kaizen is dead, the X-T20 is obsolete, the end is near, Fuji forgets its customers, Fuji has become like Sony“…. I could read this and more in the FR comments and also on our facebook and twitter pages.

But I think they missed some crucial points of the article…

So breath slowly, relax… and read this:

As I said in the original article, our source never said that this is the Kaizen-Death for the X-T20. It only said that a major firmware code re-design is necessary, if Fujifilm wants to fit in all the X-E3 features (faster AF-tracking, highlight blinkies, RGB histogram) into the smaller X-T20 memory. But the source also said that, in case of a major code redesign, it’s still not sure that everything will fit into the X-T20. Maybe just some X-E3 features will make it into the X-T20 (which is why I also launched this poll in the article).

Got it? This is far from saying “the X-T20 Kaizen Love is over“. It just means that you have to be patient, because it’s not that easy like copy&paste the X-E3 into the X-T20.

Of course it’s all just a rumor, but here I share another tidbit from the same source, which, if correct (and you will be able to verify it soon by your own), adds credibility to all what it shared with us here.

How can you verify it?

Well, at the moment, nobody can, and all we can do is to trust our source, who evidently has access to the X-E3 file data.

However, as soon as Fujifilm releases their first X-E3 firmware update (which should be a very nice one, as reported here), when downloading, everybody will finally be able to see how big it really is.

If our source is right, then it should be around 100MB, hence about twice as big as X-T20.

As some of you noted in the comments, the Fujifilm X-T2 and X-Pro2 will get the improved AF-tracking of the X-E3 (but not the highlight blinkies and RGB color histogram).

So why should the X-T2 and X-Pro2 be capable to fit the improved AF tracking, but the X-T20 not?

Legit question… and assuming that the X-T2 and X-Pro2 have the same memory capacity of the X-T20, I see two possible answers:

Why AF-Tracking, but No Highlight Blinkies?

As you noted, highlight blinkies (and RGB histogram) will not come to the X-T2 and X-Pro2 with the late 2017 firmware updates.

Feel free to make your speculations, but I believe that replacing one AF-system with another, won’t take much memory space. Very simplified we could say, that you write the new AF code over the old one (although it’s more complicated than this of course).

So while I’m personally optimistic that the AF-tracking could come also to the X-T20, I’m no so sure about the other features. But it’s still possible I think, if Fujifilm re-designs the firmware code to optimizie memory space.

Fujifilm has the Power

But firmware size or not, where there is a will, there is also a way.

If Fujifilm wants, they can come up with more Kaizen updates for the Fujifilm X-T20… maybe not with all the X-E3 features, but at least with the improved AF-tracking, which you guys voted your most wanted feature.

Rest assured… Fujifilm remains committed to Kaizen. They can’t make the impossible possible, but they will keep their policy to provide firmware updates to improve your cameras over time as much as possible (even though it costs them a lot of money and has negative impact on sales of newer cameras).

Unless, well… unless you are an X100 line owner, who traditionally don’t get much Kaizen love. The lack of X100 line cameras firmware support is, dear Fujifilm, the only mackle in an otherwise impeccable Kaizen approach.