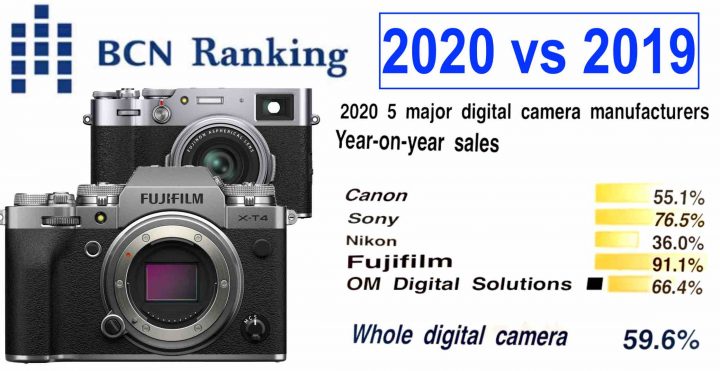 The BCN ranking for the year 2020 has been published. BCN collects data of about 40% of the Japanese electronics and online stores.

Every camera company lost sales compared to 2019, however, Fujifilm did best, getting very close to 2019 in terms of sales thanks to the excellent sales of the Fujifilm X-T4, the Fujifilm X-S10 and the Fujifilm X100V. The only flop of 2020 was the Fujifilm X-T200, which is in my opinion the single best entry level camera you can get, but sadly it did not get the success it deserved.

This confirms what a Fujifilm managers already hinted here: Fujifilm did better in 2020 than other brands.

Now let’s look at the data.

70% of the market is mirrorless.

The cameras that pushed Fujifilm to the top of the ranking were the following.

On the other hand, the bad news for Nikon seem never to stop. They lost 64% of sales. And not because Nikon was lazy. On the contrary, they were very active, and launched the following mirrorless cameras:

It looks like the mirrorelss full frame market is so overcrowded, that not even a glorious brand with an immense heritage like Nikon is able to break through it.

Not to talk about the powerful L-mount alliance with joined forces of Panasonic, Leica and Sigma, which is a fiasco. And don’t trust me on this. Just read what the Sigma CEO himself said in this interview of 2020: “in terms of market share, Sigma is not satisfied by the L-Mount Alliance“.

Looking how things are going, I start to think that it was indeed a good idea of Fujifilm to stay out of the FF mirrorless world. They better focus on brilliant hybrid APS-C cameras and on making the medium format system smaller and more affordable.

Look, the Fujifilm X-H2 will come in 2022, and it will raise the bar of hybrid cameras once again, just like the X-T3 did when it was launched and other companies needed long to catch up with the specs the X-T3 was offering at an unbeatable price (I mean how much do you pay for a 4K60p 10bit FF camera today?).

As for the GFX system, you tell me, what will be a bigger shocker on the market: yet another mirrorless full frame camera, or a medium format camera with a 70% fuller sensor than full frame that is smaller and more affordable than some of the full frame mirrorless flagships out there? Because this is what is happening, with the Fujifilm GFX100S offering twice the megapixel of the Sony A1 for a more affordable price, in a body that is smaller than the Panasonic S1 series.

It will be hard for every brand in future. But at least Fujifilm will offer something different, giving themselves more chances to resist in the market with a unique offering.