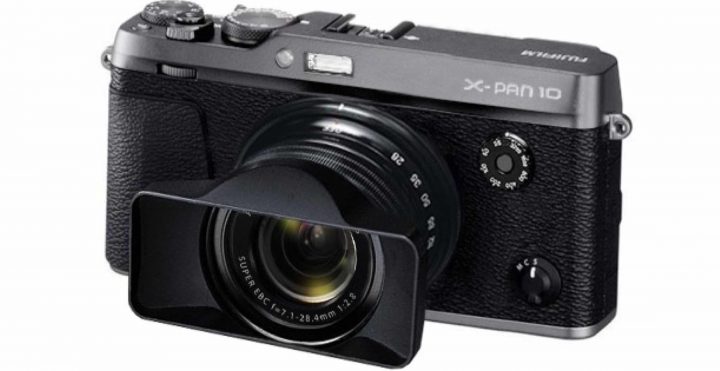 The concept raised a vivid discussion on FujiRumors, and today I’d like to continue the chat.

In fact, FR-reader Ricardo sent me his own concepts of what he calls the “Fujifilm X-PAN10“, along with some of this thoughts.

Here is his idea:

I never really understood why Fujifilm abandoned the X10/X20/X30 camera line instead of upgrading it to a 1″ sensor, such a camera would be a dream come true to me but I’m guessing they might be worried about those cameras cannibalizing the APS-C line.

It came to my mind a different approach to a new camera that continues the “smaller-sensor-with-zoom” line that could both not sacrifice sales on other Fuji camera models and also be completely different from any other camera on the market: a digital homage to the panoramic film camera Fujifilm TX-1.

The idea would be to use two 1″ sensors side-by-side to create a panoramic 6:2 image. Of course the lens and body would have to be bigger than the ones on the X10/X20/X30 cameras, but maybe not that much.

Here are some mock-ups

Making this camera with 1″ sensors would have the advantages of smaller size, cheaper cost and faster processing.

I can imagine some specs:

I think the Fuji / Hasselblad panoramic film cameras are still such a cult cameras today that this concept could have commercial success, I would sure buy one.

So what do you think? Would you buy such a camera? Would you add or remove something to this design? Would it have commercial success or is it too niche-oriented?
Please share some thoughts.