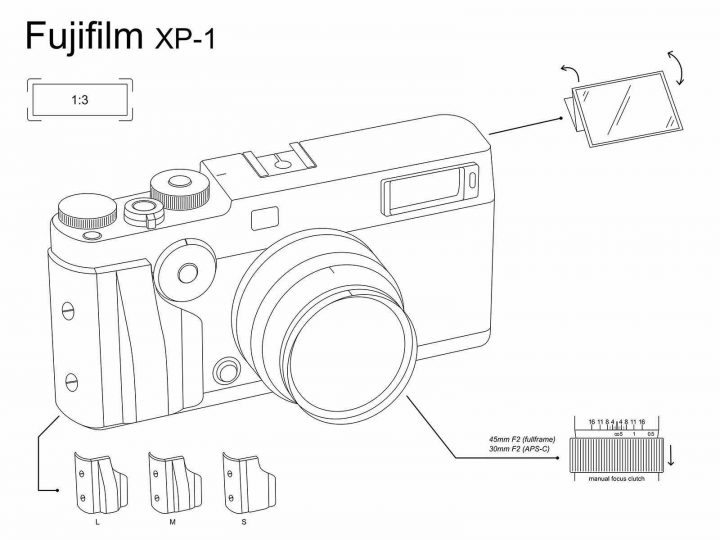 Here is a roundup of wishes and concepts I have received via email… so to say a “FR-readers wish corner”.

Also, this is your chance to drop your own wish in the comments… you know Fujifilm reads us :)

In 1998 Fujifilm manufactured the TX-1 as a joint project with Hasselblad, who marketed the camera under the name XPan. The camera is a 35mm analogue rangefinder with interchangeable lens system. What makes this camera special is that it can shoot panorama, a 1:3 aspect ratio.

Now in 2019 the camera is still special and very popular under camera enthusiast, the go up to $3000,- on the secondhand market. For street photography, if I can afford it, this would be my dream camera. Buying a camera like this secondhand is not easy, which got me thinking: what if Fujifilm made a digital version of the TX-1 / XPan. I know the GFX camera’s have a panorama crop, but that’s not the same.

What would a digital version of the Fujifilm TX-1 look like:

Should Fujifilm make a digital XT-1 / XPan camera? I would love to know the opinion of the community.

I’d love it if you pointed to the new “LIVE TIME” feature of the OM-D E-M1 MarkII — this is a VERY helpful innovation for long exposure photography, and it immediately jumps to the top of my most-wanted features on my Fuji gear (X-H1 / X-T3). Great feature-specific review. The also-new “LIVE COMPOSITE” feature covered at the bottom of that page is not nearly as useful in this regard…

My one main request that i really really need fuji to add is better manual focus throw options. The throw on my favorite Fuji lenses without the linear scale is just way to far. Way to many rotations to go through the focal range. I know there is a non linear option but that doesn’t work for video. What I think they should have is degrees for linear like 90 – 360 ect similar to what the new Panasonic s1 does. At lease on the lenses that don’t have the scale which isn’t many.  For some fuji lenses it takes multiple full rotations to go through the focal range and that can be rough for video.

I am a proud XT-20 owner. I wanted to reach out with a suggestion for a feature that Fujifilm might be easily implemented with a firmware update, either for current cameras or future models: the ability to limit the range of the autofocus. In a sports setting, or for vloggers, it would prevent the camera from accidentally focusing on the background. It is better explained by dpreview here.

NOTE: the Fujifilm X-Pro3 has this feature

Could FujiRumors amplify a software problem that has long affected dual card X-series cameras? Perhaps, if Fujifilm hears it loud enough, they will fix the problem via a firmware update. I hope so.

When shooting JPEG + RAW, saving JPEGs to one card and RAWs to another actually impairs the usability of dual-card Fujifilm cameras. It has always been so and it is a shame. Flexibility to save JPEGs to “Card Slot 1” and RAWs to “Card Slot 2” is needed.

2. Dual card X-series cameras always read from “Card Slot 1” when the “Review” button is pressed. Although it is possible to then manually change the review to “Card Slot 2”, it is cumbersome to do so, and not permanent.

ISSUE
If users save JPEG and RAW images to separate cards, they cannot enlarge their images after the “Review” button is pressed. This means that eye focus etc can’t be double checked during Review.

Saving JPEG and RAW images to separate cards is possible and, often, desirable from a user point of view, but doing impairs the usability of the dual-card Fujifilm cameras. Fujifilm X-Tx present implementation is uncharacteristically poor and illogical. It is a major and, in my view, unnecessary gotcha.

PRESENT WORK AROUND
The well known (and only) work around to get sufficient enlarge-ability during Review (when shooting in the JPEG + RAW mode) is to set the “Set Up/Save Data Set-Up/Card Slot Setting (Still Image)” to BACKUP. It works, but results in JPEG and RAW files being interleaved on a single card. Not every user of a dual-card slot camera wants JPEG and RAW images interleaved on a single card. Instead, there is a lot to be said for having the option of separating RAW and JPEG files. Afterall,that is why the option is in the menu of Fujifilm dual-card slot cameras. Too bad that the option’s implementation is seriously flawed.

IMPACT ON NEW USERS
This firmware issue is a particular problem for new users of X-series dual-card slot cameras. Many can’t figure why their images can’t be magnified very much during Review and become disappointed with their camera. Of course, the issue has nothing to do with the camera. It is a just a bug that continues to live from one camera iteration to the next for some unknown reason.

The X-T2 ranks as one of my favorite cameras that I have ever used. I appreciate Kaizen and hope that it can be used to fix the illogical, but obscure issue that I’m highlighting here. It sounds nerdy and is hard to explain, but fixing the issue would help many users, and help them a lot.