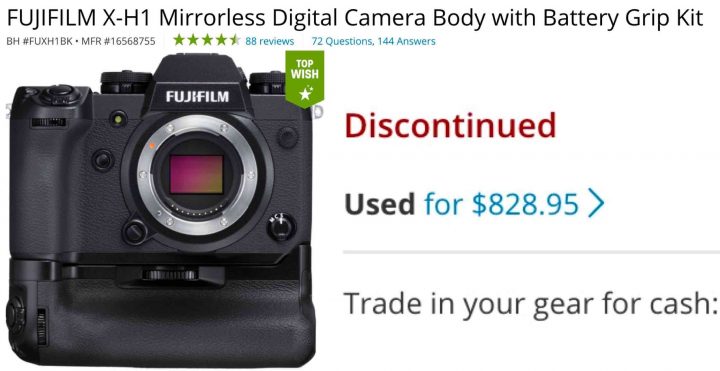 The Fujifilm X-H1 is now marked as discontinued at BHphoto in basically all its configurations.

Just a few days ago, the same happened to the Fujifilm X-T2 here.

The era of Fujifilm’s 24 megapixel cameras is over.

But I feel I need to say a few words about the Fujifilm X-H1, a camera that didn’t get the success it deserved, mainly for a very unlucky timing by Fujifilm: releasing the more powerful Fujifilm X-T3 just half a year later.

I have no idea how Fujifilm Japan thought this could work out well. Maybe they thought that IBIS alone is enough to keep the X-H1 attractive also once the X-T3 hits the market. But apparently they were wrong.

And yet, at its very last moments, the Fujifilm X-H1 lived moments of glory, by selling like hot cakes thanks to massive rebates.

Ok, I hear you say… Fujifilm X-H2 is coming.

The Fujifilm X-H1 is running out of stock, but you can still find it available in some stores, for example at Adorama here.

So, if you want to grab one, you better do it now.