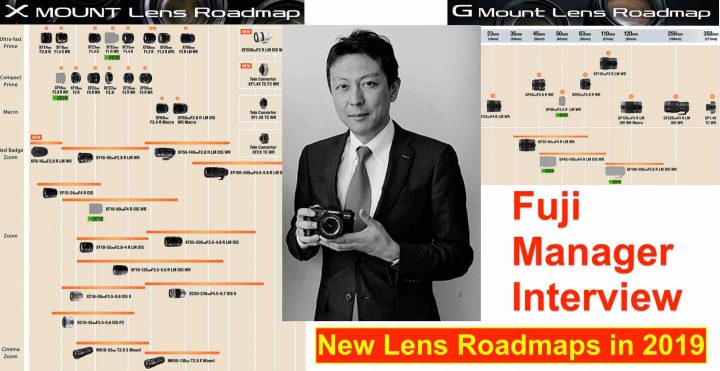 Fujifilm Manager Toshihisa Iida has released an interview to the Japanese website newswitch, which you can read summed up and translated in its main points below.

But before we go ahead, I want to highlight one thing Toshihisa Iida said:

But if we look at the official Fujifilm website, we see that the latest uploaded roadmaps are:

This means that Fujifilm plans to release an updated roadmap within this year, which fits with what we rumored a few days ago here.

But how many lenses can we expect to be announced in 2020? Toshihisa Iida said:

To date, we have announced an average of 5 or 6 new products each year. […] We are not going to slow that pace”

Also in this case, this fits with what we already told you back in 2017, when our sources told us that Fuji’s schedule is to release 2/3 GF lenses and 2/3 X lenses a year.

Now let’s just hope Fujifilm will listen and give us what you guys voted the most wanted X and G mount lenses here.

How to revitalize the market

How to Overcome Challenges