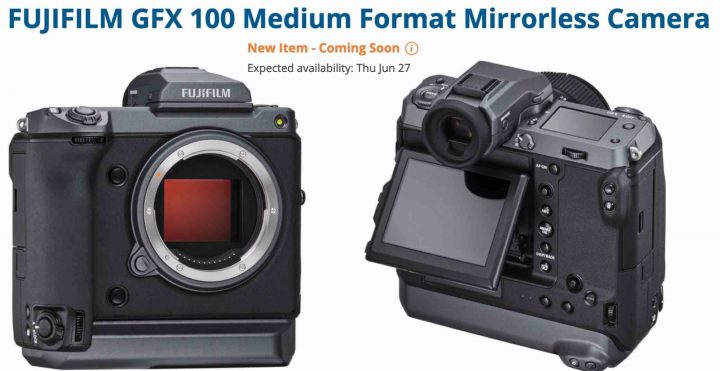 The GFX100 is a flagship model of the GFX Series of mirrorless digital cameras, which have won strong praise from professional photographers and photo enthusiasts alike for the use of a large image sensor, boasting approximately 1.7 times the size of the 35mm full-frame sensor. Among digital cameras equipped with a sensor larger than the 35mm full-frame format, this is the world’s first** model that offers (1) a back-illuminated sensor with phase detection pixels, (2) in-body image stabilization (IBIS) mechanism and (3) 4K/30P video recording capability. The innovative mirrorless digital camera fulfills photography’s intrinsic mission of “capturing and recording precious moments that are never to be repeated again.”

<Innovative features of the GFX100>

With the features of the GFX series image sensor which has the a diagonal length of about 55 mm (43.8 mm x 32.9 mm) and is approx. 1.7 times bigger than a 35 mm full-frame format, GFX100 has double number of pixels compared to the current model***. Combining with the unique color reproduction technology, it achieves the world-leading image quality.

*Offering the following three structures / functions for the first time as a digital camera that carries an image sensor larger than the 35mm full-frame format:

The use of phase detection pixels across the back-illuminated image sensor produces supreme image quality while making AF up to twice*4 as fast as that of the current models***. It also delivers outstanding Tracking AF performance on a moving subject and advanced accuracy in Continuous AF.

The use of up to 5.5-stop*4 five-axis in-body image stabilization controls pitch and yaw movements (up / down and right / left tilting) as well as shift (vertical / horizontal) and roll (rotational) movements. This dramatically broadens the scope of situations where users can hand-hold the camera and still enjoy the world of ultra-high 102 million pixels resolution.

The GFX100 is equipped with a five-axis IBIS mechanism that delivers image stabilization of up to 5.5 stops. Taking advantage of its sensor-shift structure, the IBIS stabilizes images not only against pitch and yaw movements (up / down and right / left tilting) but also against shift (vertical / horizontal) and roll (rotational) movements. The entire shutter unit is suspended with four springs to minimize the effect of shutter shock. This dramatically broadens the scope of situations where users can hand-hold the camera and still enjoy the world of ultra-high 102 million pixels resolution. 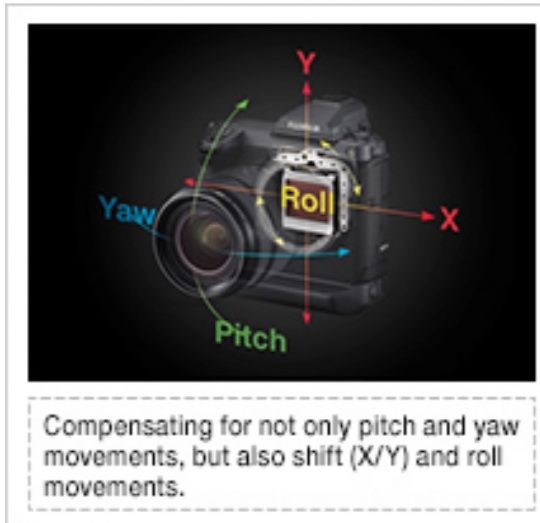