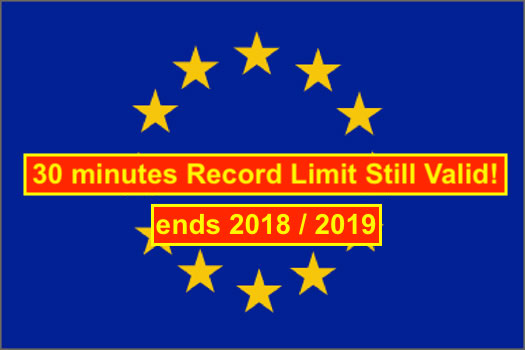 After my article yesterday, about the EU regulation that says higher import taxes have to be paid in EU for still cameras that can record over 30 minutes, there was still scepticism if this was indeed correct. Some even went so far to say this is a fake news.

And guys, indeed this rule makes no sense, and it is hard to believe that such a thing exists in these days.

But as the biggest nerd-magazine in EU (which I regularly read ;) ) C’T writes, the rule has been set by the European Union back in 2007. At that time, there were only a few cameras able to be able to record over 30 minutes, so this wasn’t a big deal.

However, technology evolved, and today many cameras could easily break the 30 minutes mark (if the battery life allows it).

But will this limit be removed in future?

The best place research this, is the official site of the European Union itself, because it’s there, where such decisions are taken.

Following recent technical developments, those criteria are currently being revised. While certain criteria may seem outdated, the combination of the quality of the video image and the length of the video (at least 30 minutes) are deemed to be objective and verifiable criteria which are applied in a uniform manner across Member States. The Commission is not aware of technical limitations to those devices developed by the industry to evade import duties. It is therefore intended to maintain those criteria.”

But in the same statement, the EU also says that, in discussions with the WTO, this limit will be removed for stills cameras:

“The Common Customs Tariff duties are fixed by the Council on proposals of the Commission. The Commission can in this context confirm that the product is part of the coverage of the revised WTO Information Technology Agreement, which has been negotiated by the Commission. This means that the customs duties for camcorder will be removed after the revised agreement enters into force and thus in extension benefit EU consumers.”

At this stage, the limit has NOT yet been removed for digital cameras, and this is the reason why the Fujifilm X-H1 and many other cameras still have the 30 minutes limit. So, whoever says that the X-H1 30 minutes limit is not because of EU legislation, is sharing wrong information.

However, this will change in future, as the EU says here:

The text commits 50 parties, including the EU’s 28 member states, to eliminate tariffs on IT products in four stages over a three-year period ending on 1 July 2019.

As also Sony itself confirmed to Max Yurvey here, Sony is waiting for the EU law to change to remove the 30 minutes record limit. According to Sony, it should happen in 2019.

But today, the 30 minute video record limit is still law, hence companies continue to limit their cameras to 30 minutes to save on import taxes, and make their cameras cheaper.

This will be removed, but given the burocratic monster the EU is, I believe it only when I see it :).

The one question now is, once this nonsense EU law will be removed, can the X-H1 get a FW update to raise the record limit?