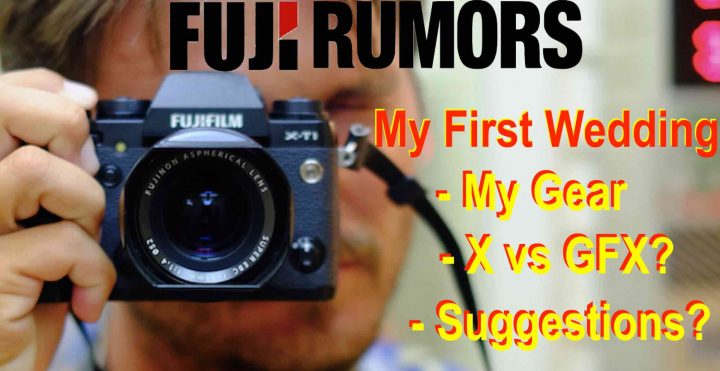 Back in January 19, 2020, a very dear friend asked me if I can photograph part of his wedding and I accepted. You can read the story here. But we all know what happened in 2020, and the wedding had to be postponed.

But now time has come. In just a few days, I will grab my gear and photograph his wedding.

When I initially accepted, I was pumped and excited about it and I reported about it on FujiRumors. But as soon as I did, some of you guys warned me that I am putting my friendship at risk, which caused a little bit of panic in me.

But then I thought back at what we lived together. Lots of great moments, but we also crossed the darkest hours together, which are too sad to touch on in this article, but I briefly mentioned something in the comments here and here.

What binds us is too strong to be put in danger by some eventually not so fantastic pictures.

And also, I have been very clear to him and his wife: I’ve never photographed an event like this.

I mean, I know I have excellent cameras and lenses, I know how to use them, I understand photography, but this does not make me a wedding photographer. So do not expect anything near to the professional results of the official photographer.

And speaking of the official wedding photographer…

One more thing gives me huge confidence: they do have an official photographer. He will be the boss and under no circumstance I will interfere with his work. He is the Pro, he has the skills and experience.

So whatever I shoot, however my images turn out, the most important moments of the day will be captured by him.

What I have been asked for is to just photograph the preparations to the wedding of the husband. Hence i will go to his home, take a few pictures how he gets ready for the wedding etc. And then, after dinner, the official photographer will leave and I will be taking some pictures of the people chilling, talking, dancing etc.

Plus, without interfering in no way with the work of the official photographer, during the day I want to try to get some candid shots of the guest interacting with each other and so forth.

Back in mid January, I wrote this article, where I told you that my best friend asked me to photograph his wedding.

Well, actually not his entire wedding.

There is an official photographer, but he will stay only until dinner. He will then leave, and my friend asked me if I can cover it from dinner onwards.

So I asked you…

… in order to be ready for the shoot, any tips and tricks, also from a gear point of view?

The article received a massive response with over 230 comments.

I did read them all, but was not able to reply to all of them, as then all the mega buzz started for the X100V announcement and the Fujifilm X-T4 rumors. Not to talk that January is always extremely busy also at school, and now in February I started a video project, which takes lots of time, too.

So I thought I post one big response article now, that touches three main points: the gear, how I should relate with the official photographer and something that came unexpected for me: the risk to destroy my friendship.

The Gear and X-T4 Dilemma