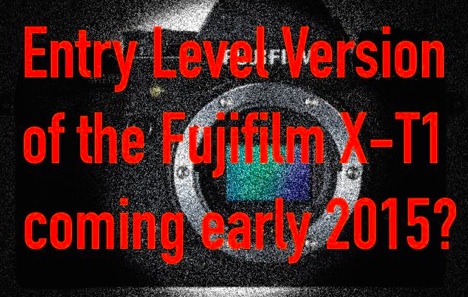 [MESSAGE TO THIS SOURCE: I could be great if you contact me also via email (if you want, use a fake email address), so that we can talk directly to each other.]

Who follows FR regularly will already know that Fujifilm has (according to FR-rumors) two new X-cameras in the pipeline for the next few months: a fixed lens one and an entry level MILC. Now, the fixed lens one could be the XQ2, the successor of the smallest X-series camera on the market.

And what about the MILC?

Well, according to an anonymous source with “nick name”, who was right in the past, it will be a cheaper version of Fujifilm’s best selling X-series camera, the Fujifilm X-T1.

Please keep in mind that, although I try to be as accurate as possible (83% correct rumors in 2014), you should take rumors that do not come from trusted sources, with a grain of salt… including this one.

So what, would this be a smart move or not? I’m really curious to read what you think about it in the comments.