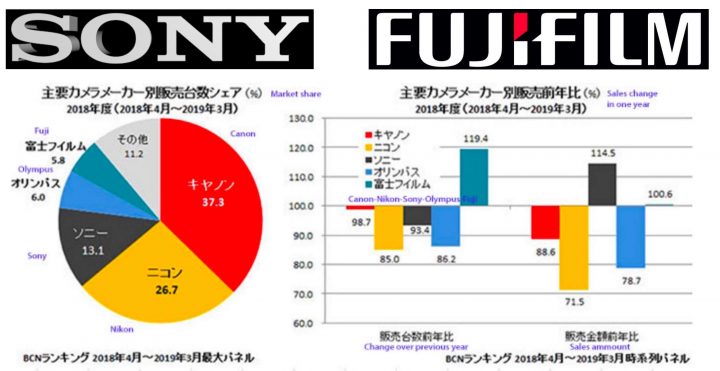 BCNranking published the market shares changes between April 2018 to March 2019.

Sony sold less cameras but increased the sales value, meaning they are strong in the high end camera segment. All others brands are struggling.

Well, don’t get fooled by the +19,4% increase in camera sales by Fujifilm. As BCN writes:

“Fujifilm’s sales were boosted by the strong sales of the digital version Cheki “instax SQUARE” series.”

So it’s once again Insax that keeps Fujifilm’s imaging division afloat. Just look at the top AmazonUS camera products ranking, and you will see tons of Instax products there.

I am afraid that, if we would get a separate report for Fujifilm’s digital imaging division, we would see rather negative figures also at Fujifilm.

Down below you can see Mirrorlessrumors’ summary of the chart:

Compared to the previous year:

But the story changes if you consider the overall value of the camera sales. Sonny mostly sells high-end cameras and that’s where you see their big leap forward: