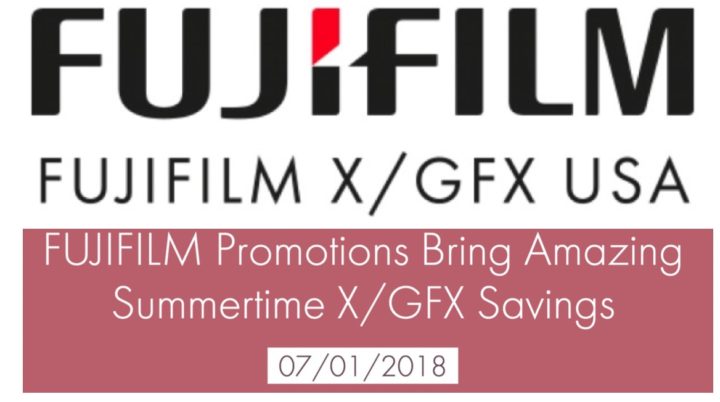 The Fujinon lens deals just ended recently… and now it’s time for the camera bodies to get massive discounts until September 29, 2018.

The deals are not yet live, but of course here on FujiRumors we will inform you as soon as they are available.

Fujifilm USA officially anticipated some of the deals that will soon come:

We have also have seen huge price drops (up to $500) on the X-T2 in the last few days. Maybe some stores just made them available a bit too early. So far regarding the X-T2 we have seen:

It’s going to be a FUJIFILM summer with some amazing deals on X Series and GFX system camera bodies and lenses.

For more experienced shooters, there’s the flagship FUJIFILM X-H1 with its amazing In-Body Image Stabilization and advanced video features. The X-H1 is available body only for $1,649.95, or with the Vertical Power Booster Grip for $1,949.95, both saving $250 on the regular prices.

There’s every reason to make the jump to FUJIFILM’s award-winning medium format system this summer, too, with superb savings to be had on the 51.4 megapixel GFX 50S body, and its pro-quality GF lenses. Photographers craving the best in image quality can pick up a GFX 50S body for $5,849.95, an incredible saving of $650.

Check out the GFX system savings on the FUJIFILM Camera Savings website. Remember, this promotion ends on September 29, 2018 – so act fast to avoid disappointment!