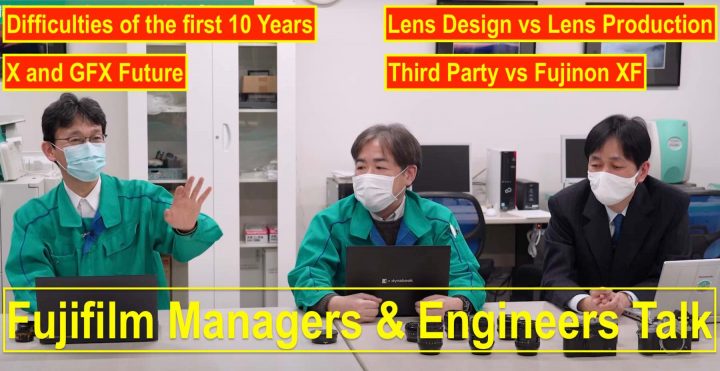 A couple of days ago, Fujifilm managers and engineers have published an almost 20 minutes interview in Japanese.

The whole talk is in Japanese and a real pain to watch using the automatic youtube translator tool.

A pain FujiRumors readers should not go through, so I did what nobody else did: I rolled up my sleeves and put 1.5 hours of my time into making sense of the talk and summing it up for you guys with the greatest care and highest accuracy.

I guess this is why Fujifilm went with such a similar design with the XF18mmF1.4 R WR, XF23mmF1.4 R WR and XF33mmF1.4 R WR. They can set up one great design, and apply that as much as possible across several lenses. Seen from this perspective, ditching the focus clutch on the XF23mmF1.4 R WR improves producibility of lens itself, and hence reduces costs for Fujifilm.

And indeed, if you look at all the latest Fujinon lenses (for example the XF18mmF1.4 R LM, XF23mmF1.4 R LM, XF33mmF1.4 R LM but also the upcoming XF56mmF1.2 MKII), they are way ahead of anything else you can buy from third parties around that range.

The Future of the X System