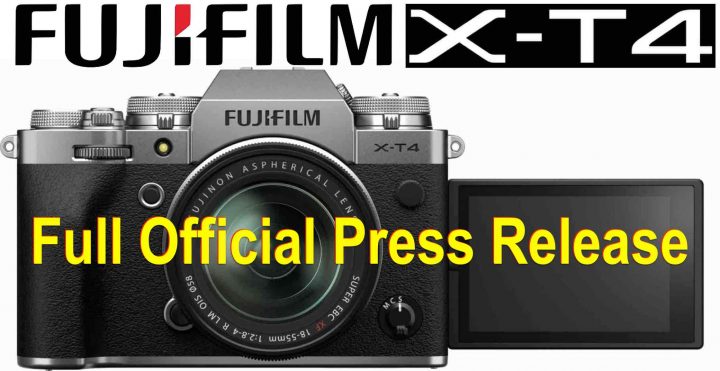 – Capturing a precious moment with the world’s fastest* 15fps shooting and quick AF as fast as 0.02 seconds
– Incorporating high-performance in-body image stabilization in a compact and lightweight body
– Capable of recording premium-quality video with ease
– Catering to professional needs with the new high capacity battery that lasts approx. 500 frames per charge

Tokyo, February 26, 2020 — FUJIFILM Corporation (President: Kenji Sukeno) is pleased to announce the launch of the mirrorless digital camera “FUJIFILM X-T4” (X-T4) in April 2020, the latest addition to the X Series of mirrorless digital cameras known for their compact and lightweight body and superior image quality based on the company’s proprietary color reproduction technology. The X-T4 delivers the world’s fastest* 15fps shooting and a high-speed AF performance as fast as 0.02 seconds. This will be a new flagship model, boasting the highest performance in the history of the X Series including the use of a five-axis in-body image stabilization (IBIS) mechanism that offers up to 6.5 stops of image stabilization.

The X-T4 is a compact, lightweight and stylish mirrorless digital camera that inherits the “central viewfinder style” adopted by the X-T Series. The use of a newly-developed focal plane shutter enables burst-shooting at 15fps. This combines with a further-evolved algorithm for fast and highly-accurate AF performance at the speed as fast as 0.02 seconds, ensuring to capture a precious photo moment. The camera is also X-T Series’ first model equipped with a five-axis IBIS mechanism that gives up to 6.5-stop** advantage, making it a perfect choice for sports and other active shooting situations. The Film Simulation function, which reproduces colors and tonal expressions of photographic film Velvia and cinematic film ETERNA, has been added with the new ETERNA Bleach Bypass mode, adding richness with its high-contrast and low-saturation. The X-T4’s extended video functions include the 4K/60p 10bit video recording capability for smooth 4K video in rich colors, and a digital image stabilization (DIS) function for stable video footage with minimal camera shakes. Furthermore, a newly-developed high capacity battery will allow users to shoot approx. 500 frames per charge, catering to extended shooting requirements of professional photographers.

The X-T4 and other X Series of mirrorless cameras can be combined with a total of 35 interchangeable lenses specifically designed for the X Series, including the large-diameter mid-telephoto prime lens “FUJINON Lens XF50mmF1.0 R WR” to be released by the end of 2020, to cover a broad range of shooting categories.

(2) IBIS and other features that support ease of use