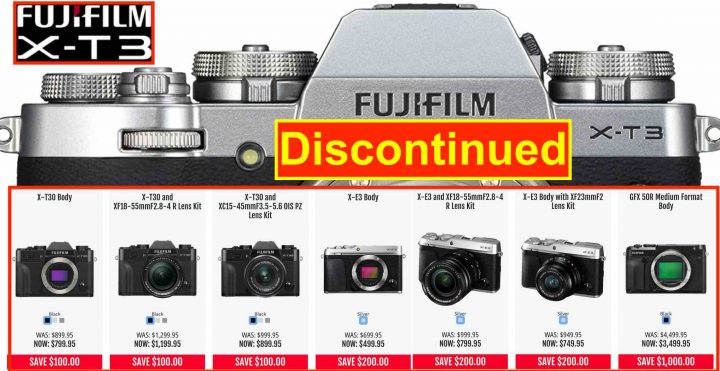 Until very recently, one of the official deals offered by Fujifilm was a $500 rebate on the Fujifilm X-T3.

As a matter of fact, at the time of this post this deal (deal removed also from Adorama). The same deal is no longer available at BHphoto. Most importantly, it has been removed from the official deal list page of Fujifilm USA (see screenshot above, where the X-T3 is no longer listed).

So what happened? Well, a FR-reader wrote me an email and told me this:

My local store told me that the X-T3 has been discontinued. Over the weekend they also apparently stopped the $500 rebate, that in the U.S. had the camera selling for $999. The sales rep told me the intent is to let any remaining inventory in the supply chain sell at a higher price.

Down below is the list with what remains of the Fujifilm Winter deals. You can still find it [shoplink 48151 ebay]available on eBay[/shoplink] and several stores, but Fuji won’t produce any new X-A2 cameras.

Considering that the Fuji X-A2 is selling very well in Asia.  IIRC a Fuji Manager statement, it’s the best selling interchangeable lens camera in some countries like Thailand. That’s why I strongly believe that there will be a Fujifilm X-A3 at some point.

A different story for the X20 and XQ2, which are also officially discontinued, but I doubt we will ever see a successor.

The Fujifilm X-A line is the most affordable MILC X-series camera line of Fujifilm and features a regular Bayer sensor, unlike most of the other X-series cameras, that feature an X-Trans sensor.