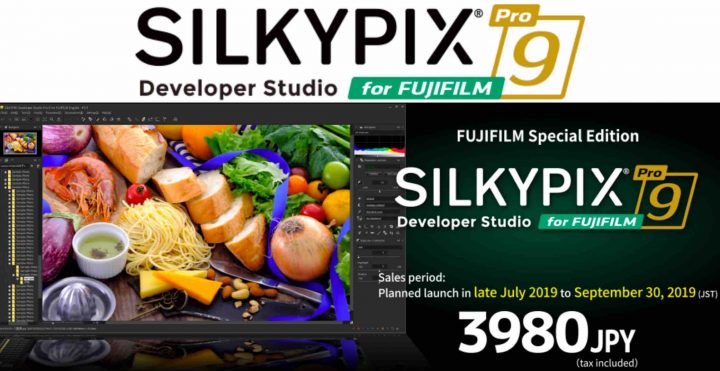 Silkypix has announced Silkypix Pro 9 for Fujifilm, to be released between late July 2019 to September 30, 2019.

Adjusting the hazy image with the “Dehaze” slider removes cloud-like distortions in your image caused by water vapor in the air and leaves the image with just as much clarity as if it were taken on a bright sunny day.

Individual adjustment of brightness of highlight/shadow area of photograph

The Highlight/Shadow sliders in the exposure adjustments allows you to manually adjust the brightness of the bright (highlight) and intensity of dark (shadow) portions of the image. Even when shooting subjects with intense contrast while using exposure compensation, it is sometimes still difficult to control the exposure. Here, simply adjust the “highlight/shadow” individually during RAW development to achieve a result suitable for the image of the Photographer.

You can blur or sharpen the periphery of the specified range. Blurred periphery produces a close-up effect by blurring the periphery of your subject. In addition, if the image is shot with the aperture opening value of the lens and the resolution of the peripheral area drops, the “Sharp periphery” can be used to make a good correction.

Search in thumbnails is a function for searching and displaying images by specifying a condition such as “shooting info” such as File name or Date, comments, or ratings from specified folders. You can also specify multiple folders at the same time, which is a very useful feature for locating the desired image within a larger collection.

These include the independent placement of initialization buttons for instantaneously returning images to their pre-adjusted states, the addition of user-mark colors for image selection, and the easy transfer of images from the SILKYPIX to retouching software.