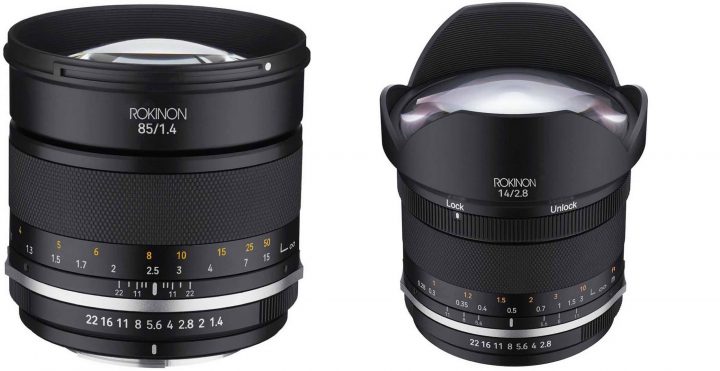 An apt telephoto prime for portraiture and other selective compositions, the FUJIFILM X-mount Rokinon 85mm f/1.4 Series II Lens is characterized by its fast f/1.4 maximum aperture to suit working in low-light conditions and for controlling depth of field. The optical design incorporates one hybrid aspherical element that helps to reduce distortion and spherical aberrations for a high degree of sharpness and accurate rendering. An Ultra Multi-Coating has also been applied to reduce flare and ghosting in order to achieve greater contrast and color fidelity. The manual focus design permits working with subjects as close as 3.6′ away and a rounded nine-blade diaphragm contributes a pleasing bokeh quality.

Mixing advanced optics and sophisticated handling, the FUJIFILM X-mount Rokinon 14mm f/2.8 Series II Lens is an ultra-wide-angle prime that is especially well-suited to astrophotography, architecture, and landscape shooting applications. Featuring a 14 elements, 10 groups optical design, this lens utilizes a series of aspherical, low dispersion, and high refractive index elements to reduce color fringing, aberrations, and distortions for sharp, clear, and color accurate imagery. An Ultra Multi-Coating is also featured, as well as a built-in petal-shaped lens hood, to suppress lens flare and ghosting for improved contrast when working in bright, direct lighting conditions. Complementing the imaging assets, manual focus operation, with an internal focusing design, is employed that permits working with subjects as close as 11″ away, and the metal housing is weather-sealed to permit working in inclement conditions. Additionally, a focus lock ring permits securing the focusing position to prevent accidental changes and the aperture ring can also be de-clicked to better suit video applications.