But before we start, just a quick note about the graph. For the first time, BCNRanking decided to base their statistics not only on the Top 20 Products, but they consider the “Brand Shares”. Therefore, in the graph above made by DicaHub, you can see it divided in two parts, the Top 20 Products (until 2013) and the Brand Shares (in 2014)

According to the latest BCNRanking, the Fujifilm mirrorless market share is of just 5% (in Japan). Ricoh, Nikon, Canon, Sony, Panasonic and Olympus sell more mirrorless cameras than Fujfilm.

But let’s put the figures into the proper context. While it’s true that Fujifilm is still the smallest (but coolest ;) ) CSC system in this ranking, there are signs of hope in 2014. Let’s take a look at the 2 different rankings…  and keep always in mind that these numbers are for the Japanese CSC camera market only (which is the biggest mirrorless market, though)!

Fujifilm didn’t appear at all in the BCNRanking until 2013 included. But now, in 2014, the X-series gained 5% market share. Looking at the evolution starting from 2010, we can see how only Sony, Canon and Fuji are increasing, while Olympus, Panasonic and Nikon are decreasing.

THE 2014 MONTHLY RANKING
(see graph at the bottom)

If we take a closer look month to month ranking in 2014, we will see different results. In this ranking Olympus, Panasonic, Canon and Fujifilm are increasing, while Sony and Nikon decreasing.

Interesting also to note that Canon said that their goal is to get the biggest mirrorless shares until 2017… so they will soon attack aggressively the CSC market. A Full Frame CSC-Canon is rumored to come… and more. Just check out the CanonWatch rumor section to read more about it.

So these are the statistics… now it’s up to you to make your considerations in the comments.

the 2014 Month to Month ranking

There is not much time left to win an amazing Mindshift Rotation180 bag. Join the contest is easy… check out the details at thedigitaltrekker.

Zoom! At f2.8 at doncraigphoto / Spanish review at quesabesde (translation) /

Shooting weddings, street, family…anything…. with the Fuji X100s, ….the camera with soul! at gregcoltmanphotography / Winter Doldrums Defeated By … Andre’ The Fuji X100s at streetshooter / Underground with the X100s at mattlaw / Acrobats at Muscle Beach in Southern California taken my X100S at adamjohnrichardson / X100S Classic Chrome – when? And workarround at dpreview /

I detached the tele converter at jonnenaarala /

Fuji X-T1 Graphite Silver Edition Review |What Happens In Vegas… at slrlounge / Fuji X-T1 – Sports and Battery Life from a Canon user’s perspective at caveiraphotography / Fuji X-T1 – The perfect travel camera? at whereswheels / How to improve the Fujifilm X-T1 D-PAD with Sugru at erohne / Fujifilm X-T1 Graphite Silver Edition: So good they coloured it twice at htxt / Some Settings I Found Work for Me on the Fujifilm X-T1 at thewanderinglensman / Rome – Shooting jpeg! at finn-b / Windy here in Lofoton Norway — Red Fishing Cabins— 1st class living in a amazing area! at jackgrahamphoto / How Does the Fujuifilm X-T1 Handle? at thewanderinglensman / Video by X-T1 + XF 56mm F1.2 youtube /

Full Frame envy? Focal reducers to the rescue: a review of the Camdiox focal reducer for Fuji (part 1)  at eyesuncloudedphoto /

FR-reader John received his copy of the HS-V5 tethered shooting software (it’s available in Japan) and sends us his very first impressions after spending 20 minutes with it. A more detailed review will come soon.

Thanks a lot John… and here we go:

Having used the Canon dedicated software and Adobe Lightroom tethering solutions, I can say that Fuji is spot on.

I set the import folder in Fuji, to be the same as the one I normally use for my eye-fi card and used a dedicated usb male to micro usb 2.0 cable from “Tethertools”. This allowed me to use Adobe Lightroom and compare speeds. I loaded the software onto a Microsoft surface Pro 3 with a docking station by use of an old iomega external drive.

The CD comes in a hard case with instructions on how to quickly setup and use. It’s simple and easy. Fuji got it right first time. You must first set your X-T1 USB settings to PC Auto. I discovered this from a few minutes of trial and error, I wanted to see if a non techy could do this without extensive knowledge of tethering. After you open the Hyper Utility, which is really cool itself, you click on the dedicated tether icon, the simple instructions in the case tells you to do this. The software immediately recognizes the camera. I immediately chose the camera option and depressed the camera’s shutter, nearly instantaneously, the photo appears on the monitor.

I minimized the Fuji software, and yes it was sitting right there in Lightroom too. You can now use LR without that bothersome tether icon floating around. Adobe prefers that you have this software as a compliment to theirs. I can say to those that don’t have it, you will wish that you did. I will send you a more detail review after this weekend.

The HS-V5 has already been released in Japan and should be released elsewhere within February (that’s the information that came to me from a new source).

[UDPATE: I’ve been told that more EU stores are already shipping this lens]

There is probably no Fujifilm X gear that started shipping faster than the Fujinon XF 16-55mmF2.8 WR!

In fact, Dutch store fotohanskeuzekamp has already received the first bunch of lenses and is now fulfilling pre-orders (just 24 days after its announcement)!

In USA, AmazonUS expects to have it in stock on the 12th of February, Adorama on the 25th of February and BHphoto simply says “Coming Soon”. 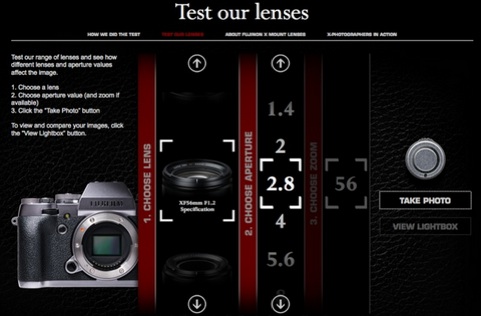 Fujifilm recently launched a handy online tool for people ready to shop for Fujinon lenses. The site is called fujifilmxmount. You can test the whole range of lenses and see how different lenses and aperture values affect the image. Here is how it works:

thanks to the anonymous FR-reader for the link