Which are the best cameras for landscape photography?

There is also a Fujifilm camera among the winners, the Fujifilm GFX100S, in the “money is no object” category.

There is no disputing that the Fujifilm GFX medium format cameras are the best option for landscape. Our choice is the Fujifilm GFX100S. What is not to love: you get that amazing 100MP sensor clearly well suited for landscape photography. We also prefer the GFX100S body over the GFX100 because it is more compact. You get nice ergonomics. The Fuji style tilt screen is certainly nice for landscape when you are at awkward angles and it is just easier to travel with.

Fujifilm also has an excellent line of lenses, including the GF20-35mmF4, which is very rare in medium format to have an ultra wide range like that and it’s also a very sharp lens.

It has IBIS and it’s very effective.

If you need more megapixel, you can shoot in multi-shot and get 400MP images.

There is simply no better pick for landscape photography than the Fujifilm GFX100S, if money is no object. 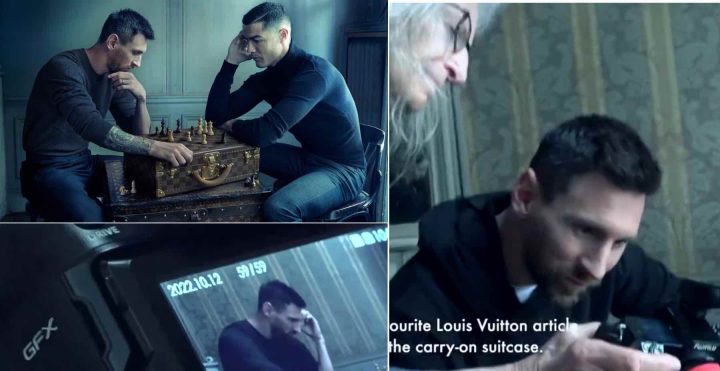 Apparently Annie Leibovitz is not really following the photography forums and certain gear youtubers, otherwise she would know that the Fujifilm GFX100S is a completely useless tool because:

Limited by her gear, Annie stucks with minor gigs like photographing the two most iconic soccer players of the last 15 years, Ronaldo and Messi, for an insignificant company like Louis Vuitton in the context of a negligable event like the FIFA World Cup.

If only she would listen to certain big YouTubers, she would get rid of her GFX gear and finally be able to shine artistically by recording selfie videos in a basement.

The day will come, when wisdom will finally illumiate her. Until then, you can see a video of her working with GFX, Messi and Ronaldo as well as the final image below.

And btw… the gear Annie uses, is now heavily discounted.

NOTE: this is a satirical post… we don’t take life too seriously on weekends, right? ;) And thanks to our Greek friends at pttl.gr who spotted the news and shared it with us. 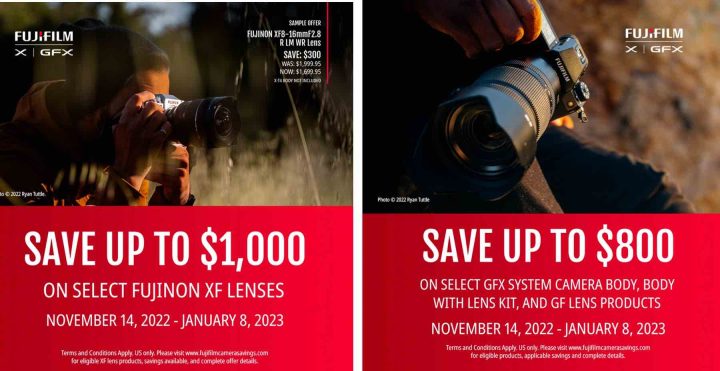 It’s the holiday season, and Fujifilm has launched some stunning deals on plenty of X and GFX gear in USA and Canada

And finally, almost two years after its launch, there is a discount also on the Fujifilm GFX100S.

I own the GFX100S and if a PSAM dial layout is something you can work with, then I can totally recommend the Fujifilm GFX100S. 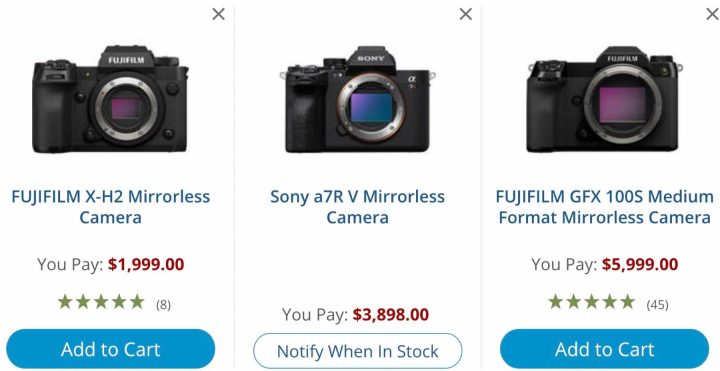 You can check out the complete specs comparison at the B&H comparison page here.

With the Fujifilm X-H2 costing just half the price of the Sony, to me this shows once again that the best balance is offered by APS-C. Also considering that the 40MP Fujifilm X-T5 will come in at an even lower price.

But if price does not matter and resolution as well as ever so slight increase in dynamic range is what you need, then you can also pay 50% more than the A7rV and get 67% more pixels and plus better dynamic range on the Fujifilm GFX100S.

It’s just nice that we have so much choice these days.

But specs alone don’t tell the whole thing and in some cases they can be even a bit misleading.

The Fujifilm GFX100S might beat the Sony A7rV when it comes to resolution and dynamic range, but the Sony A7rV and of course the latest Fujifilm APS-C cameras have superior autofocus and better video features.

Another example… the Sony A7rV has a 9 Million dot viewfinder as opposed to the 5 million dot EVF of the Fujifilm X-H2. But the EVF of the X-H2 has all new optical elements that give an incredible corner to corner sharp view.

And once you go at 5+ million dots and beyond, it gets harder and harder for the human eye to notice any difference. In fact, I have read statements of journalists who used both viewfinders, the one of the new Sony A7rV and the Fujifilm X-H2, and they said that they honestly can’t see any difference. So I guess it’s up to companies to decide if customers have to spend more money on even higher resolution EVF’s that bring no real life benefit, but that allow them to brag on the specs sheet, or use a more affordable EVF that gives just the same results.

What on the other hand makes much more influence on the real life shooting experience of the Sony A7rV is the new tilt screen, which is similar to the one Fujifilm already used many years ago on the Fujifilm X-T100, and here on FujiRumors we said that this is actually one of the two features Fujifilm should take from their entry level line and implement in higher end cameras.

So, as in everything, there is much more than just specs that define a camera. But specs are a good start, and you can compare them here at BHphoto. 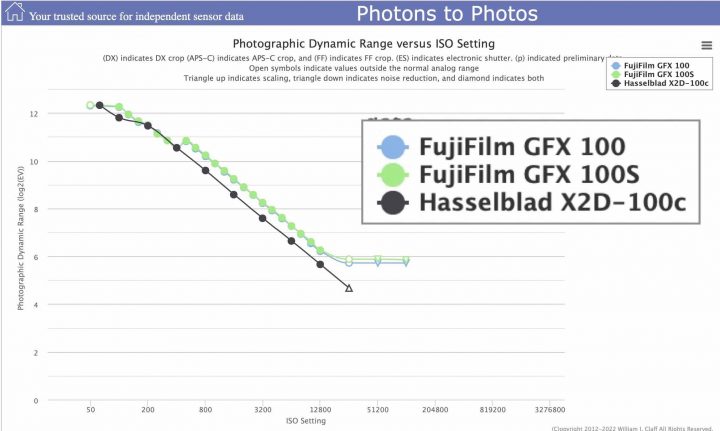 The web is full of professional reviewers suddenly discovering how amazing the Hasselblad X2D is, how gorgeous its dynamic range, the flexibility of those files. It’s all so amazing. Forget full frame, medium format is the future!

Sadly many of those reviewers have since now totally ignored that the Fujifilm GFX100S exists. And by the way, they also ignore the Fujifilm X-H2 and X-H2S. Fujifilm simply does not exist.

Luckily for us, Bill at Photon to Photos did not forget that Fujifilm makes digital cameras and has them all in his database.

And he also added the Hasselblad X2D now.

How you can see, the Fujifilm GFX100S matches the Hasselblad dynamic range at base ISO, but starting from ISO 400 and beyond there is not competition and the GFX100S beats the X2D in terms of dynamic range.

So Fujifilm is able to take out more of the sensor than Hasselblad.

You can access the data here at Photon to Photos.

UPDATE: Jim Kasson, a very respectable and competent fellow GFX shooter, has a different view on the chart. He writes:

Bill’s PDR tests don’t take sensitivity into account. My tests show that, at base ISO (64 for X2D, 100 for GFX 100S), the two cameras are within 0.2 stops of having the same sensitivity. Once you correct for that, Bill’s curves for the two cameras are nearly on top of each other. So the Fuji Rumors claim is at best misleading, and at worst just plain wrong. C’mon folks, these cameras have the same sensors, albeit operated slightly differently. How far apart can the DR be?

You can read more at blog.kasson here. 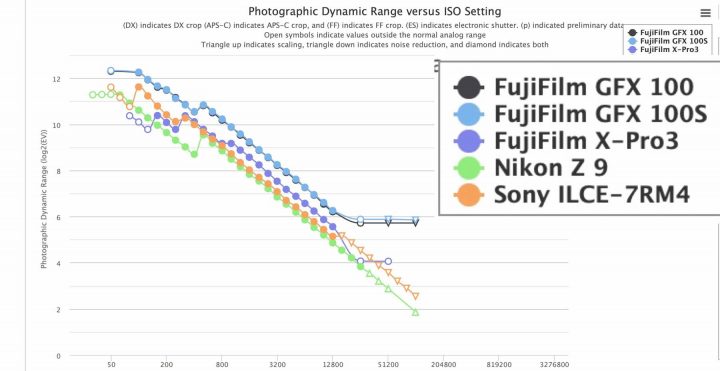 Photons to Photos has published the dynamic range data for the Fujifilm GFX100S.

Sure, all modern digital cameras give you plenty of dynamic range. But if you are looking for the one that gives you a bit more than the others, then that’s the Fujifilm GFX100S. If you want, you can access  the data at photonstophotos here. 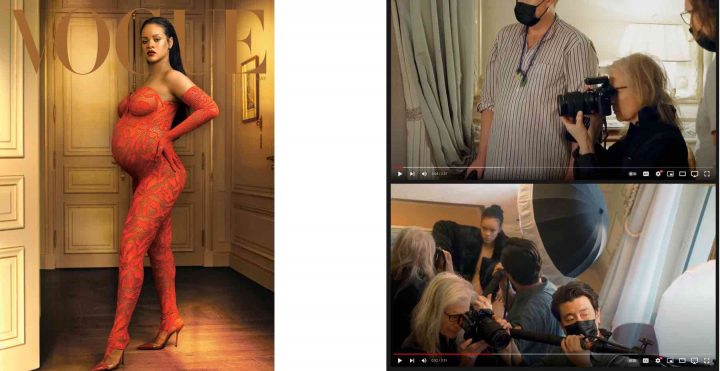 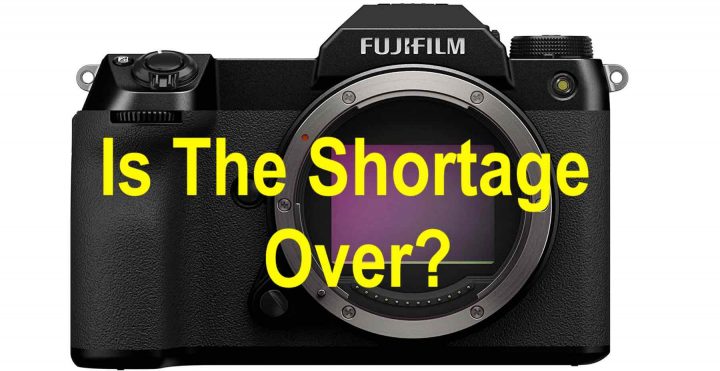 Maybe, just maybe, all this shortage of Fujifilm GFX100S is coming to and end.

In fact, at the time of this article, a very limited number of Fujifilm GFX100S cameras is available at AmazonUS (via official Fujifilm retailer UniquePhoto), Adorama, Focuscamera and Moment. Sadly it’s not available at BHphoto, which had a few samples available a few weeks ago, but as to expect they sold out like hot cakes.

I do hope that this is the end of a shipping disaster caused by two factors: Fujifilm massively underestimating how many GFX100S they’d sell and the parts shortage caused by the Covid pandemic.

At least on the GFX front, the shortage seems to be over, with all their latest GFX gear in stock (although in limited number). 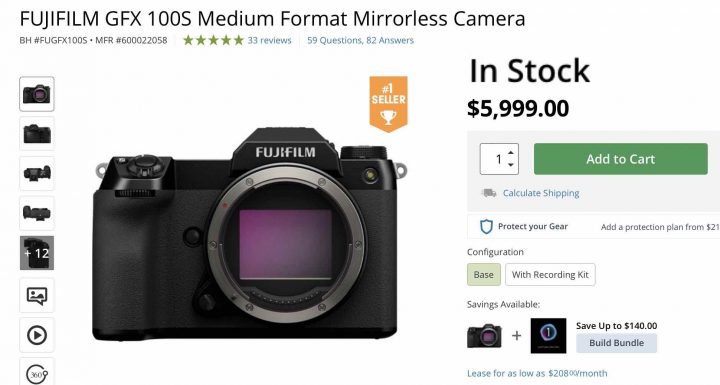 It finally happened. After a bit over a year, the Fujifilm GFX100S is now in stock at BHphoto here.

The GFX100S is a rare good to find in stock still today. So, if you are interested, maybe it’s best not to delay further.

I own the GFX100S and if all you dream of is the best possible image quality at a reasonable price and size package, then look no further, the GFX100S is it.

Fast forward to the 29th of January 2022, and you can find the staggaring number of two Fujifilm GFX100S in stock at Moment.

One year later, the GFX100S is still a rare good on the market.