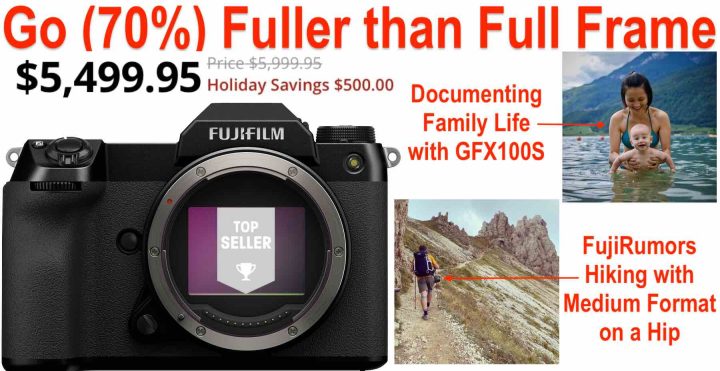 For the first time ever, almost 2 years after its launch, there is a significant rebate the stellar Fujifilm GFX100S in USA, Canada and Europe (full list below). And knowing I am a GFX100S user myself, fellow FR-readers started to ask me if I can recommend the GFX100S.

I personally use the Fujifilm GFX100S a lot when I hike the mountains around my home (as you can see from the IG posts I will share below). And I also took the GFX100S with me on some multi-day mountain hikes, as I reported here:

Look guys, you know better than me that there are compromises to make no matter which camera you pick.

But if the one compromise you don’t want to make is on image quality, then gor for the GFX system.

Because whatever system you currently use (M43, APS-C or FF), once you shoot with GFX, you’ll always come home with at least a hand-full of images that amaze you due to the sheer power the Fujifilm GFX100S demonstrates in those files.

I guess that’s also the reason why the SonyAlphaRumors guy himself owns the GFX100S as you can see here.

So, if you want to shoot fuller than full frame with a sensor about 70% larger than FF, if you want to know that in your hands you are holding the one camera, that will give you the best results and the biggest flexibility in the trickiest light conditions, the look no further: no camera will be able to handle it better than the Fujifilm GFX100S does.

Only some of those monstrous digital MF cameras can beat the Fujifilm GFX100S, but good luck hiking with those… if you can afford them!