The Everyday Dad is a huge fan of the Sony A7III and he has praised it often on his channel. He never used Fuji, and the Fujifilm X-T3 is his first one.

So, today he compares the Fujifilm X-T3 with the Sony A7III. Some key points:

You can see the full video on his youtube channel here. 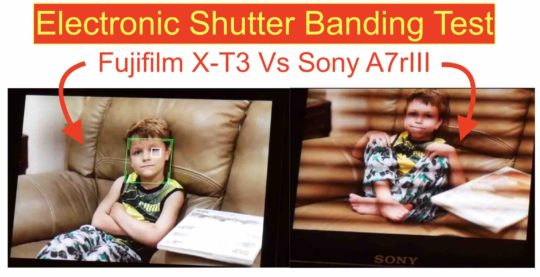 Dmitry wrote me that he has made a banding test of Fujifilm X-T3 banding vs Sony A7RIII. You can see the result on his youtube channel here. He writes:

“Fuji says they reduced rolling shutter by 50 percent with X-T3 electronic shutter. But what about banding? I tested for banding in my living room on X-T3 and compared it to my much more expensive Sony A7RIII. Which one does better with electronic shutter? It is not even close! Fuji wins by a mile“

Everything Wrong with the X-T3

Wedding photographer Ben shared a 27 minutes long video listing reasons why you might not want to buy the Fujifilm X-T3.

You can see the full video at Ben Hartley Youtube.

Adrian Weckler says the quality of low light shots on X-T3 is much better than previous generation X-Pro2. Check out his review at Adrian Weckler youtube.

Fujifilm X-T3 vs. A6500 vs FS5 Rolling Shutter Comparison

Lazy Video Guy compared the rolling shutter of the Fujifilm X-T3, A6500 and FS5. See the video on his youtube channel here.

ian worth youtube – Ian is a wedding photographer, and very happy with the X-T3 (he also owns the X-T2). Check out his video to hear what makes him happy. Teaser: he got shots with AF that he didn’t think he would get.

Imaging-resource just published their Fujifilm X-T3 lab test shots. You can go to their comparomenter and compare the X-T3 RAW and JPEGs to whatever camera they have in their system.

Keep in mind that the Fujifilm X-T3 samples were shot using the XF56mmF1.2 whereas the X-T2 samples used the XF60mm, so take the comparison with a grain of salt.

Dan Bailey tested the high ISO performance of the Fujifilm X-T3. You can read the article and see the results at danbaileyphoto.com. From the conclusions:

“When compared side-by-side with the X-T2, X-T3 images do show an incremental improvement in low light performance and overall tonal rendering, although the different is not as drastic as it was going from the X-T1 to the X-T2. Even though the X-T3 does have a more advanced system, don’t expect to see a huge, night and day difference between the X-T2 and 3 in terms of low light performance.”