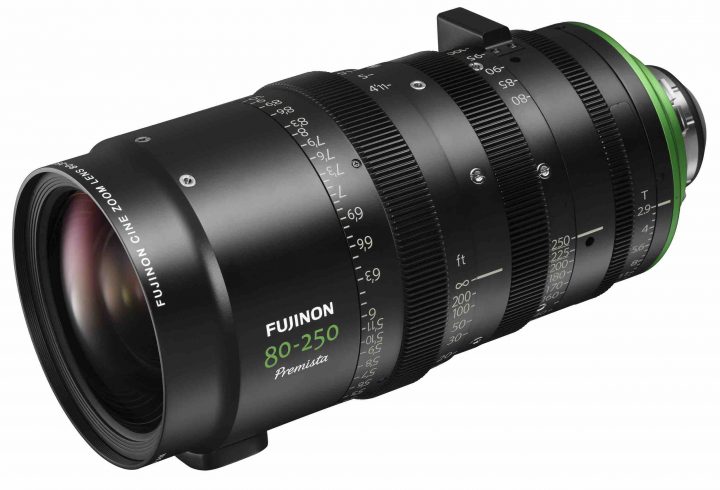 Read the press release below.

Tokyo, September 5, 2019 — FUJIFILM Corporation (President: Kenji Sukeno) is pleased to announce that it will release the telephoto zoom lens FUJINON Premista80-250mmT2.9-3.5 (“Premista80-250mm”) with a focal length of 80-250mm in December 2019. It will be the second model to join the Premista Series of zoom cinema lenses that support large-format sensors* and deliver outstanding high resolution, natural and beautiful bokeh and rich gradation with HDR (high dynamic range). The Premista80-250mm complements the FUJINON Premista28-100mmT2.9 (“Premista28-100mm”), released in August this year, to cover a broad range of focal lengths from 28mm to 250mm, further expanding focal lengths coverage that can be captured with premium image quality.

For producing high quality videos such as Hollywood movies, there has been increasing demand for filming equipment capable of delivering beautiful bokeh and rich gradation with HDR. Accordingly, many cinematographers have been adopting cinema cameras equipped with a large format sensor. While a variety of prime lenses compatible with the large format sensors are already available in the market, there is a growing demand for zoom lenses, which cover a wide range of focal lengths without having to change lenses frequently, and therefore offer more efficient operability.

In response to such demand, Fujifilm has developed the Premista Series of zoom lenses for high-performance cinema cameras equipped with a large format sensor. The Premista28-100mm, the first model in this Series released in August this year, has been praised by professionals of video production for “edge-to-edge sharpness” and “coverage of the most frequently-used focal lengths for exceptional convenience.”

The Premista80-250mm is a telephoto zoom lens covering focal lengths from 80mm to 250mm. Featuring large-diameter aspherical lens elements and unique focusing / zooming system, the lens achieves an astonishing level of edge-to-edge sharpness. The use of 13-blade iris design, combined with shallow depth-of-field which is a characteristic of large format sensors, produces natural and beautiful bokeh to faithfully capture the subject’s texture, three-dimensional definition and even an atmosphere of the scene. Furthermore, the lens applies Fujifilm’s unique optical design to minimize ghosts and flares, thereby creating rich gradation with HDR and bringing out the full potential of large-format sensors.

The Premista80-250mm can be paired with the Premista28-100mm to cover focal lengths from 28mm to 250mm, capturing scenes with broad background in wide angle as well as closing in on a subject from a distance in telephoto. The two lenses also share the same front diameter and the gear position for three rings. This ensures efficient operability, as users can fit the same matte box, follow-focus system and other accessories, without re-adjusting accessory positions when changing between the two lenses.

Fujifilm has led the cinema industry since its foundation in 1934 to achieve domestic production of photographic and motion picture films in Japan. The company’s products are widely praised by videographers around the world, with the development of high-performance zoom cinema lenses winning the Emmy Award by the American Academy of Arts and Sciences in 2017. Fujifilm will continue to tap into optical, high precision forming and assembling technologies that have been nurtured in the field of cutting-edge video production to develop a wide range of lenses, thereby addressing the diversifying needs.