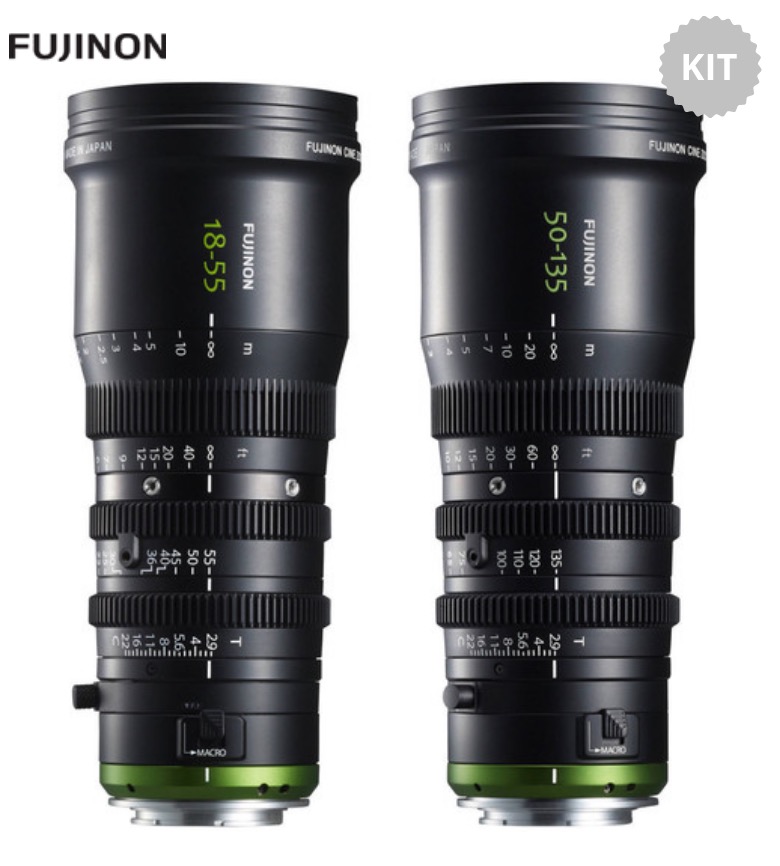 FUJIFILM Corporation (President: Kenji Sukeno) is delighted to announce that a new FUJINON MKX18-55mmT2.9 (MKX18-55mm) and FUJINON MKX50-135mmT2.9 (MKX50-135mm) will be added to the mirrorless digital camera “X Series” interchangeable lens lineup in June 2018. These lenses deliver high optical performance with the lightweight body of approximately 1kg and comfortable operability for professional video shooting. MKX18-55mm and MKX50-135mm are the first full manual cinema lenses to be compatible with the X Series interchangeable lenses. In the 35mm format equivalent, MKX18-55mm covers a focal distance from 27mm to 84mm and MKX50-135mm covers a focal distance from 76mm to 206mm. Combined with X Series’ unique color reproduction technology, MKX lenses further broaden the expression for professional video shooting.

The rapid growth in popularity of movie and video shared on the internet has increased the opportunity for shooting movies with a relatively small budget using digital cameras. With this in mind, Fujifilm released the “FUJIFILM X-T2” in 2016 which supports 4K video recording. To further support increased demands for video production, the “FUJIFILM X-H1” has been announced today, which features a range of new or upgraded video functions such as the new “ETERNA” mode for Film Simulation, ideal for shooting movies.
Increase in video production has created a demand among videographers and cinematographers for lenses optimized for shooting videos. Traditionally, cinema lenses which are required to meet the needs of videographers were typically large, heavy and expensive compared with photographic lenses. In February 2017, Fujifilm released MK lens for E-mount* cameras which have been praised for their ease of handling thanks to the compact and lightweight design. Despite their affordable price and lightweight design, the E-mount lenses offer the same optical performance and operability as other professional cinema lenses. The new MKX lenses keep the same design concepts featured on the E-mount MK lenses but are now compatible with Fujifilm’s X Mount cameras within the X Series. The new MKX lenses have an electrical contact which allows communication between lens and camera, which not only corrects the distortion** and the color/brightness shading, but also achieve various color expressions with Fujifilm’s Film Simulation modes.

“MKX18-55mm” and “MKX50-135mm” cover a focal length from 18mm to 135mm, which is the most frequently used focal length in video production and achieve a constant T2.9*** aperture across the entire zoom range, enabling a shallow depth of field as well as a beautiful bokeh effect. The lens designs are optimized for shooting videos as they minimize focus shift and optical axis shift while zooming, and reduce lens breathing-the change of angle of view during focusing. The lenses also feature three rings to enable manual and independent operation of focus, zoom and iris (aperture), all with the gear pitch*4 of 0.8M (module). The focus rings can rotate fully up to 200 degrees to facilitate precise focusing. These features make the lenses very comfortable and convenient to operate.

Fujifilm’s FUJINON cine lenses won the 69th Engineering Emmy® Award in 2017 and have been used at movie / CM / TV production sites around the world, thanks to their advanced scene-depicting capability. Tapping into its optical, high-precision processing and assembly technologies that have been nurtured over the years in the field of movie production, Fujifilm will introduce the “MKX lens” series to the current X Series interchangeable lens lineup to meet the diverse needs at the movie production frontlines.

1. Main features of the MKX lenses：

(4) Standardized design for ease of operation