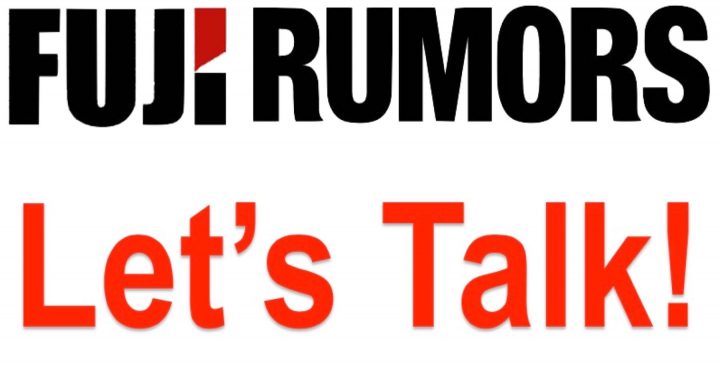 Ok, let’s talk about it.

I’ll make the start by saying a few things. Then you let me know what you think.

FujiRumors goes with the flow, and a flow can look like this:

And every time I go with the flow, some FR-readers that are not interested in that particular flow, complain about me focusing on it. For example:

Now, I have addressed Nr.1 already in the past here. So let address Nr2. and Nr.3:

Clickbait is a text or a thumbnail link that is designed to attract attention and to entice users to follow that link and read, view, or listen to the linked piece of online content, being typically deceptive, sensationalized, or otherwise misleading. A “teaser” aims to exploit the “curiosity gap”, providing just enough information to make readers of news websites curious, but not enough to satisfy their curiosity without clicking through to the linked content. Click-bait headlines add an element of dishonesty, using enticements that do not accurately reflect the content being delivered.

The keywords are “dishonest” and “misleading“, meaning sharing a headline that invites you to click and then the article itself can’t keep what it promises. Or, it’s simply a fake rumor.

An example could be:

With such a headline you’d obviously click. But then imagine you’d just read “a Fujifilm manager said future cameras will have more megapixel“. Well, that’s disappointing, right? Because the headline is misleading and dishonest.

Here on FujiRumors we don’t do that.

in 99% of the cases the headline is written in a way that it makes reading the article itself rather useless, as it contains already the main information. In rare cases, though, we publish what Wikipedia calls a “teaser“, so we can write for example “this is the price of the GFX100S“, then you click the article and you read the price of “$5,999“. Accurate, precise and the article delivered exactly what the headline promised. No hype, just dry and accurate information.

Unlike others, we also don’t share fake rumors as we don’t take this kind of dishonest shortcut to get your attention and increase traffic.

What I want is to try to guide you as good as possible through the rumor jungle. And I can do that only thanks to the kind support of our sources.

Too Many Deals? Here are the Facts!

Let’s put things into perspective: since I started FujiRumors about 10 years ago, I have published a total of 7,850 articles. And until today 1,157 of those were articles about deals.

So the fact is this:

This is just a fact. And this data includes the hot November/December deal seasons.

Sure, during the pre-X-mas holiday season the percentage of deal posts goes up a bit, so I can understand when some feel they get more deal posts than usual. But on a yearly basis the deal posts are a minority.

Also consider that deals can be of interest for FR-readers, who for example recently were able to save $3,000 on the GFX50S or 28% on Capture One 22. Plus I always keep you up to date with the latest official Fujifilm deals.

But I can hear some of you saying: “but those are affilalite links!” So let’s talk about it.

Read FujiRumors for Free… or Do You Want a Subscription Based Model?

At the bottom of every single article on FujiRumors, you can read this sentence:

I have set up affiliations because running a website costs (think at a number… well, it’s surely more than what you thought).

The server, the maintenance, the technical issues to fix, the hosting and more. Unlike on youtube, where Google pays for all the server and maintenance costs, and creators don’t pay anything, on a website I have to pay it all myself.

So I have three options to keep FR running:

I did try to convince my wife to go with Nr.3, but she did not agree that we should go broke to meet the ethical and moral standards of some FR-readers, who don’t want ads or affiliate links and yet get FR to read for free.

So I decided to set up ads and affiliations, because:

Some readers suggested a subscription based model.

Well, I am not a fan of this idea. I prefer to keep stuff free. With a subscription based model I’d force people to give me money if they want to stay up to date with the latest Fujifilm rumors and news. But I think you should do it only if you want to (that’s what I have a Patreon account for). With a free model as it is now, people can support my work without paying a single penny extra via affiliate purchases. Or also do not support FR at all. It’s a free world and you guys decide to do what you want.

With that said, back to the deals:

As this blog is alive thanks to affiliate programs, it is inevitable that in a strong holiday season like now, there will be more deal posts. FujiRumors works to find the deals and bring them to you, so that you can save money, and in return I might  (at no extra costs for you) earn some money via affiliate links (if you decide to click on my links). It’s a win-win. You save money and at the same time you support me and keep FR running.

Will there be more deal posts during the holiday and Black Friday season? Yes. But at the end of the day it’s about 14% of the total articles that are deals. You decide if that’s a disproportionate number or it is something you can live with, in order to keep having FujiRumors up and running for free.

So, I think I’ve said it all. You can start to say your opinion by voting the survey down below.