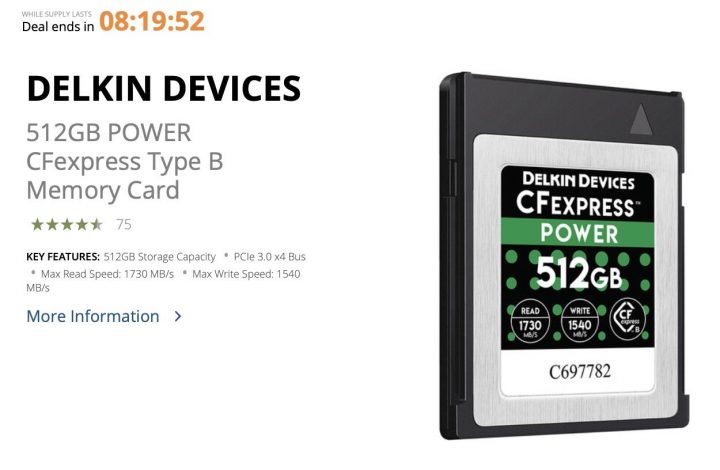 BHphoto is offering a massive rebate on the 512GB Delkin Power CFexpress Type B card. You save $330! The deals runs only for a few more hours.

The Delkin Power is listed in the officially recommended CFexpress Cards list by Fujifilm, with the only limit that it can’t record 6.2K video and 4K does not work in 4K ProResHQ mode. All the rest works fine, but for the longest possible bursts in your stills photography, Fujifilm still recommends to use the “top recommended” cards listed below.

Good thing: if you bought or will buy a Fujifilm X-H2S, you’ll get the Delkin Black for free! 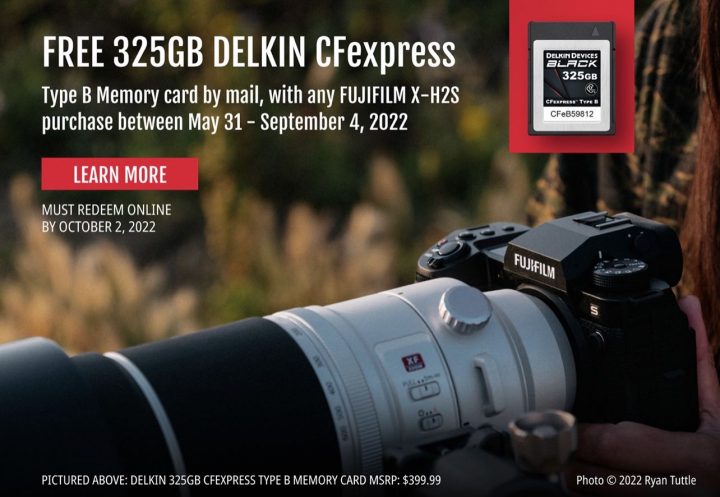 It is a crazy good deal.

Buy a Fujifilm X-H2S and Fujifilm will give you a free 325GB Delkin Black CFexpress card (worth $400) on top of it!

The problem? The deal is only valid for US residents.

This kind of annoyed every Fujifilm X-H2S owner, who does not live in USA. Even those who are widely considered as one of the most friendly and chilly people on the planet: Canadians (see video below) :). And it annoys especially those Canadians, who bought their Fujifilm X-H2S at BHphoto and other US stores!

So, upon high request of the Fujifilm community, who flooded my Inbox with emails complaining about this deal not running in their country and asking me to do something about it, I re-post the deal today, with the warm invitation to Fujifilm to extend this deal to other countries.

Do it, Fujifilm, just do it!

For the full details about the deal and the terms and conditions check out this article here.

VIDEOS BELOW
Grumpy Canadian* shares his frustration on YouTube ;)
*Mike sold his Fujifilm to go Canon R5, but now with the Fujifilm X-H2S he sold his Canon gear again and is now back on Fujifilm. And he super-happy about it.
Mike used the word “grumpy” to define how he feels about this deal running in USA only 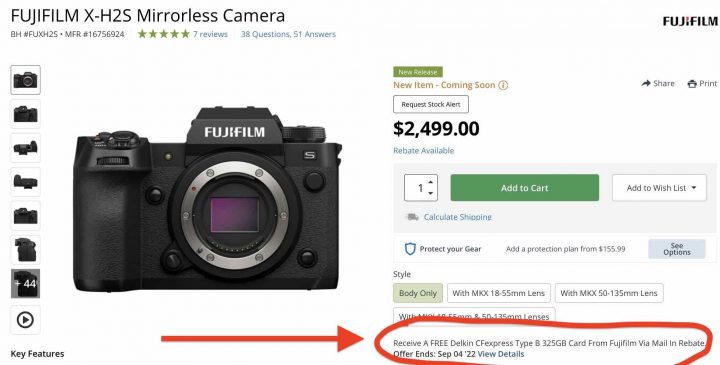 Fujifilm just launched a new deal on the Fujifilm X-H2S.

Those of you who purchases (or have purchased) a Fujifilm X-H2S between May 31 and September 4 (deal for USA), will get a free 325GB Delkin Black CFexpress card worth $400!

Here are the details in short (full terms and conditions below).

A nice surprise for all those who already bought a Fujifilm X-H2S and now will get a CFexpress card on top of it for free.

You know that Fujifilm has published a list of officially recommended CFexpress cards (you can see it below). The recommended ones all work fine on your Fujifilm X-H2S. However, for the best performance overall (longest bursts etc), Fujifilm recommends only these 4 card models. The Delkin Black in offer is one of these top four cards.

This is the last day to save big on selected Fujifilm X and GFX gear. You’ll see all the available rebates below.

*once you have received your gear, you can submit the form and claim your money back at this page (until August 31 by 5PM ET)

Use our code “FUJIRUMOR” and until August 12 you save 125 Dollar/Euro on the entire Topaz image collection (Click here).